The thing about writers is, until we figure out that we’re actually supposed to spend our lives living in make believe lands and telling pretend stories–we are a little lost. So, we work some pretty interesting jobs. What’s so great about those experiences, though is that they give us a chance to see and learn new things… and that just makes for better stories. So, really we do this for our readers.

Yeah, that’s what I’m going to go with.

I thought maybe today I’d talk a little about some of my old pre-writer professions. 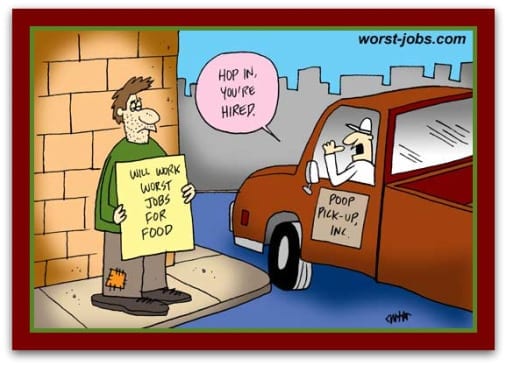 Receptionist at the International Language Building of my College- This was a crazy job, because all the students there were learning English. Yeah, so that means that none of them actually spoke the same language as me. They’d show up, try to explain to me what they wanted with words like dog, cat, and here while I mostly just smiled and nodded. This went both ways. I’d ask them to give me their ID or something and they’d hand me a stick of gum.

Camp Counselor- As far as summer jobs go, this one was the best. I learned to shoot a bow, build a fire, and throw a pot. It was free room and board in the middle of the mountains, and we had a gourmet chef. Of course, I also got a concussion, dysentary and like nine different kinds of poison ivy/oak/whatever. I’m probably going to set my next book there, though–so it wasn’t all that bad.

Phone Sales- Okay, so I can’t really count this one because I only lasted one day. I went in, sat at the little desk they provided me and tried to convince some people to buy coupon books. It was horrible. The boss smelled weird, he yelled a lot that no one was selling the impossible to sell coupons, and the people there made me sad. I went outside for my break and just didn’t go back. That was probably my favorite part.

Video Store Clerk- I got this job because I babysat for the owner of the stores. Well, this just really pissed off the manager, because he didn’t get to hire me himself. He HATED me. I mean seriously, I once caught him in the back of the store telling someone how much he wanted me to just quit. Asshole. I went home sick one day and he called the store owner to tell him he caught me at McDonalds! Ugh, I want to call that guy and call him names right now.

Kmart Floor Associate- Let me be clear that this was one of my favorite jobs ever. I worked here during high school, and I loved it. My favorite part? Um, duh….

Yeah, I got to announce to an entire store that socks and panties were just ten cents each. I loved talking on that intercom. Truth is, if I have a cocktail or two, you can convince me to do this on pretty much any microphone anywhere.

I never should have admitted that.

Now, pray tell–what awesome jobs have you worked? Would they make a good story?

I remember when you worked at K-Mart! Seems like everyone worked there.

-interned at a newspaper (Azle News!) - at a daycare - B. Dalton bookstore - Applebee's - Harris Methodist Home Health (first as a file clerk, later doing data entry) - keyholder, then an asst. mgr. at Museum Company - worked for a VERY short time at a software company - temped at the Fort Worth Municipal Courts as a data entry clerk - Fort Worth Symphony Orchestra ticket office (my best friend is now the office mgr.) - Barnes & Noble for a long time (my favorite job) - Fort Worth Library as a circulation clerk - Arlington Public Library, in charge of teen and adult services at my branch

Holy crap. I've had a lot of jobs.

@Amy, You worked at the Azle News? How freakin' cool is that???

In my mind they were like newsies in there, and there was totally a jimmy olson or a clark kent. Please don't ruin this illusion for me. :)

Are you really going to set your next book at summer camp?! Let me know when it's out...of course, I have a special place in my heart for summer camp! .-= Alden´s last blog ..- =-.

Radioshack to Sprint, Sprint to 'Graphic Designer', and now AutoCAD Designer--and a writer on the side. I've weaved a pretty strong art career in there as well but really that's it. .-= Jeannie´s last blog ..Writing Prompt: Siblings =-.

@Jeannie, oh I bet Radio Shack was super fun. Did you get to drive the remote control cars?

note to self... next time i see you...bring cocktails and mic.

Teaching high school. A lot of fodder for writing there.

@Lois, highs school teachers are so lucky!~ it's instant plot!