The first time I saw a photo of the pink and blue tie-dyed drink on Facebook, even though it was a few days late, I thought it was an April Fool’s day prank. It was too cute. Too trendy. There was no way a big chain store would sell a drink that was that bright and fun. A few days later I saw the mythical unicorn frappuccino again, this time on a poster outside of an actual Starbucks. The alarms went off. This was not a drill. And since it’s a limited time offer I HAD to act fact…so, just how magical IS the Starbucks Unicorn Frap? 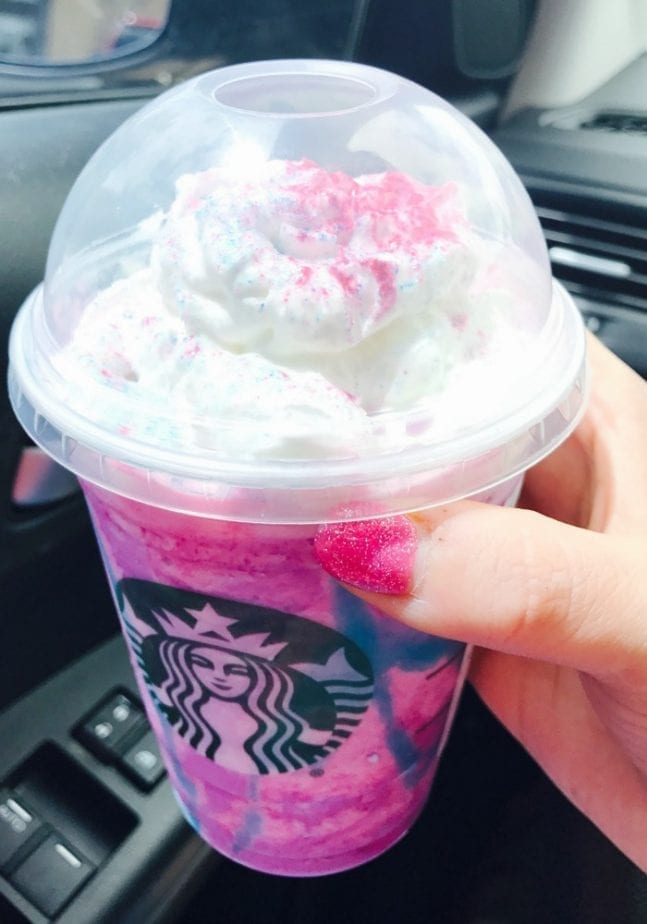 Just How Magical IS The Starbucks Unicorn Frap?

I had to try it. Unfortunately I was running a little late this morning so I had to postpone my magical adventure into beverage land until lunch. I was convinced that they would be sold out of them. Or that the line would be out the door of other unicorn addicts / weird drink drinkers. I got lucky. My Starbucks was pretty easy to get into. That hasn’t been the case everywhere. When I walked in, there were a few other customers with Unicorn Fraps sitting around. I slid into line and counted the seconds until I got to order. When asked what I wanted, I said proudly, “One grande Unicorn Frap, please!” I expected the barista to roll his eyes. Or maybe cheer and throw glitter. But he didn’t. He just punched in my order and took my name.

As I waited my mythical drink I told myself I shouldn’t get too excited. It’s just a drink, after all. Sure, it’s pink and themed after unicorns and rainbows. It’s a gimmick that got me through the door. But as the barista handed me the cold and glistening cup, I didn’t care. In my hands I held a plastic vessel of magic. It is a beautiful drink. It kind of reminds me of the scene in Hook where the Lost Boys are eating their imaginary food that looks like (and actually was) gobs of colored whipped cream. I wanted to live that scene as a kid. And this drink I now held in my hands was the manifestation of that dream.

I stuck the straw in and took the first sip. It tasted like mango sherbet ice cream. But as I drank it, the blue ribbons of raspberry mixed together changing the flavor and color of the drink. The flavor got stronger. The sour tart syrup intensified the drink as I stirred. The pink turned to a rich mauve-y purple. This is a drink with layers, crafted to taste a little bit differently with every sip. As I drank it, the whipped cream on top melted into pink and blue clouds of fluff, adding to the etherial visual experience.

It’s not going to be a drink for everyone. There is no hint of coffee. There were sips where the mixture of sweet to tart bordered on unpleasantly sour.

In the end, I’m glad that Starbucks is trying something new and fun. It’s a different kind of drink that they came up with a cool advertising campaign for. People are talking about it. I, for one, hope that it encourages other companies to have a little fun with their products.

I probably won’t rush out to get another Unicorn Frappuccino before it’s gone in a week. But I will mosey. Maybe even saunter.

Also, because it made me giggle…apparently not everyone is a fan. Take a look!