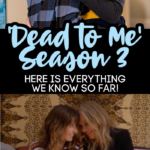 I was so saddened to hear the news about Christina Applegate being diagnosed with multiple sclerosis (MS), she had issued a statement on August 10th addressing fans.

The production of ‘Dead to Me’ season 3 has had a lot of hiccups because of Covid and then it was also halted for a short time due to her diagnosis.

But I am happy to report that ‘Dead to Me’ is returning for season three, although it will sadly be the final season.

If you’ve never watched it, it’s time for you to do that while we wait on season 3.

It stars Christina Applegate and Linda Cardellini, two of my favorite actresses, and a story like no other.

‘Dead to Me’ is a dark comedy, so if you like that sort of thing you will love it as I do.

I don’t want to talk about the story too much because that would mean spoilers and some of you haven’t watched it yet.

Basically, though, Jen (Christina Applegate) has lost her husband and meets Judy (Linda Cardellini) in a grief support group.

From start to finish, Dead To Me is exactly the show I wanted to make. And it’s been an incredible gift. Telling a story sprung from grief and loss has stretched me as an artist and healed me as a human.

Eventually, a friendship forms between the two, and they become super close and all sorts of things are revealed that they have to work through together.

They originally started filming season 3 on May 10th and had hoped to be finished by August 2nd, but covid made that impossible.

At this time it hasn’t been confirmed if filming for ‘Dead to Me’ has resumed.

I’ll be forever indebted to my partners in crime, my friends for life, Christina and Linda, and our brilliantly talented writers, cast, and crew. I am beyond grateful to Netflix for supporting Dead To Me from day one.

I’ll be sad to see the series end after only 3 seasons, but am totally looking forward to how they wrap it all up.

As of now, there hasn’t been a release date announced for ‘Dead to Me’ on Netflix, but you will know as soon as we do!