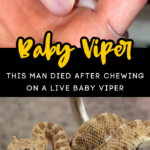 I’m not gonna lie, I’ve been mad before. I’ve even been furious. But, I’ve never been “chew on an animal for revenge” mad.

This dude got bit by a snake — a viper.

Yeah. It was a baby, but that would still suck pretty bad. But, what he did next is just all kinds of bizarre.

Rama Mahto thought it would be wise — I’m hoping he did this AFTER he treated his wound (But, SPOILER ALERT, it really doesn’t matter in the end) — to go after the baby viper.

I mean, I’d go get my neighbor to help me dispose of any snake that lunged at my legs.

But, no. He didn’t just dispose of the little guy. Oh, no. That would be too easy.

It took him a while to find it, but he eventually captured the baby viper.

Then, he decided to lay down the law with this nope rope, and — obviously not thinking things through — he decided he would give this little scaly demon his own kind of punishment.

He began chewing on the snake — the LIVE snake.

Rama didn’t get away unscathed. The wee viper bit him more than 10 more times on the face while he was gnawing on the creature.

Now, not being fully educated on all things reptilian, he thought the baby snake didn’t contain venom, because it was so young.

His family begged him to go to the hospital for treatment, but he decided to instead go in and go to sleep.

He might have been just a touch inebriated when this all went down.

I feel bad for the guy, I really do. But, let this be a lesson to you! Don’t go out drinking and gnawing on live wildlife. It can’t ever end well.