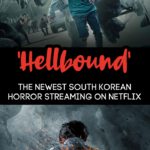 ‘Squid Game’ had taken over Netflix like a storm, however, a new series has pushed its way in and people are loving it!

The newest Netflix hit is called ‘Hellbound’ and is a South Korean horror/drama series.

This new series has a 100% rating on Rotten Tomatoes, which isn’t easy to get, and it’s already moving quickly up the top 10 list and towards that number 1 spot!

I wanted to tell the story of Hellbound in the more prolonged series format rather than as a film….It is fascinating to watch artists of our time craft and perfect the narrative of each character. All I had to do was convey to the viewers what I felt watching the actors perform.

Unbelievable demonstrations of hell take place in the middle of Seoul right in front of crowds. Mysterious beings condemn individuals to be hellbound, and otherworldly beings appear exactly at the specified time to kill the condemned in a brutal burning. Rising above the utter chaos resulting from these inexplicable supernatural occurrences is the commanding voice of Jung Jinsu, the leader of an up-and-coming religious organization, The New Truth. He claims that only sinners are marked for condemnation and that these occurrences represent divine will to make humans righteous. A group of his followers with blind faith, the Arrowhead, take into their own hands the punishment of those who go against the divine will. The world becomes a living hell.

Min Hyejin, a lawyer, challenges Chairman Jung by claiming the demonstrations of hell to be simply supernatural occurrences. She joins forces with the few who try to protect the hellbound and return the world to the realm of humans, not gods. They go up against the chaos instigated by The New Truth….Then one day, an infant born two days ago is condemned, making it difficult to believe the divine will that only sinners become hellbound

All 6 episodes of ‘Hellbound’ are available for streaming on Netflix right now.

You can view the trailer below and then let me know what you think in the comments!