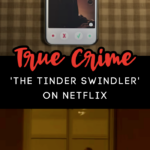 Where are my True Crime fans at?

You’re going to want to hold on, because The Tinder Swindler is about to take you on a next-level ride of True Crime proportions.

If you haven’t heard of the new Netflix documentary, The Tinder Swindler, just wait.

Did you see Don’t F**k With Cats? It’s the only True Crime documentary that has thrown my brain just a little bit off kilter and left my psyche reeling in its aftermath.

The Tinder Swindler is by the same people who brought us Don’t F**k With Cats, and I’m equal parts excited and scared to death.

Where this fairytale ends, a revenge thriller begins. Cecilie discovers his other targets and once they band together, they’re victims no more: the Tinder Swindler meets his match.

Simon Leviev was the son of billionaire diamond mine owner, Lev Leviev. He took to Tinder to find beautiful women, women he could wine and dine. He took them on exotic vacations and bought them the nicest things.

Only — It wasn’t Simon Leviev at all.

Shimon Hayut was good looking and totally charming. He was also deceptive and tricky.

Through a series of enticing relationships, he was able to allegedly scam women out of hundreds of thousands of dollars.

His captivating powers didn’t just ensnare one woman, he was able to pull his con on multiple women — mostly from Norway, Finland, and Denmark.

[He] would trick his victims into handing him over huge sums of money under false pretenses.

Over and over, these women would fall for his cunning ways and fall head-over-heels in love with him.

It was at this point he would bait the woman. He would coax them to go as far as taking out loans to help him get away from his “enemies.”

And, the women fell for it. Again and again.

The man I love was never real. Everything’s a lie.

The Tinder Swindler Is Swindled

For Cecile Fjellhøy, the red flags became many. Her sixth sense started to ping that something wasn’t quite right with this man that she had developed a relationship with.

Fjellhøy, along with two other victims of Hayut, set out to uncover the true identity of their lover, and bring him to justice.

We had to get payback.

This isn’t some Lifetime Movie. These events actually happened.

It’s a shocking true story, one that you won’t believe Hayut was able to deceptively pull off.

If you are excited to see The Tinder Swindler, you don’t have very long to wait!

The drop date for The Tinder Swindler is February 2nd, 2022, and it will be exclusively available to stream on Netflix.

If, for some crazy reason, you don’t have Netflix, get online and get yourself a subscription now. You aren’t going to want to miss this True Crime story, told by the actual victims of Shimon Hayut.

Aren’t yet completely sold on this True Crime documentary? Just watch the trailer. It will leave you clamoring to find out just how the story plays out.