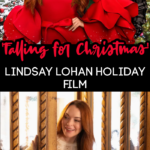 Netflix says we don’t have to wait for Santa to deliver presents this year considering the giant streaming platform is giving away one gift early this year.

Today marks a very special day for Lindsay Lohan and it’s not only because of her return on screen in a major role in nearly a decade, but it’s also October 3rd, and you know what that means.

Alongside the iconic movie moment in Mean Girls, Netflix oh so cleverly dropped the release date for Lindsay Lohan’s new holiday movie on the same day, just many years later!

Lindsay Lohan stars in Falling for Christmas while taking on the role of a newly engaged and spoiled hotel heiress who injures herself during a skiing trip.

The injury causes her character to develop amnesia which creates her journey to recovery under the care of a handsome and blue-collar lodge owner (Chord Overstreet) and his daughter right before Christmas.

“It’s such a refreshing, heartwarming romantic comedy, and I miss doing those kinds of movies,” Lindsay explained in an interview with Netflix. “All the stunt scenes were really fun for me because I haven’t gotten to do that much in a lot of my films… When I’m flying off the hill, attempting to ski well and not doing it.”

Not to mention starring in the new movie, Lindsay also produced the movie alongside director Janeen Damian.

The new movie premieres right smack in the middle of the holiday season and right before Christmas on November 10th, only on Netflix!