I hate driving with a passion. I mean, I love the act of driving, but only if I’m so far out in the middle of nowhere that all of the idiot drivers have been replaced by inbred, human-flesh-hungry nuclear mutant people. Because honestly? Sometimes I would genuinely prefer to be murdered and eaten by deformed, feral humans than spend another day on the road with self-centered and inattentive lepton-brained turd burglars who are operating a two-ton metal-and-fiberglass vehicle that is filled with explody-liquid-fire-pain. 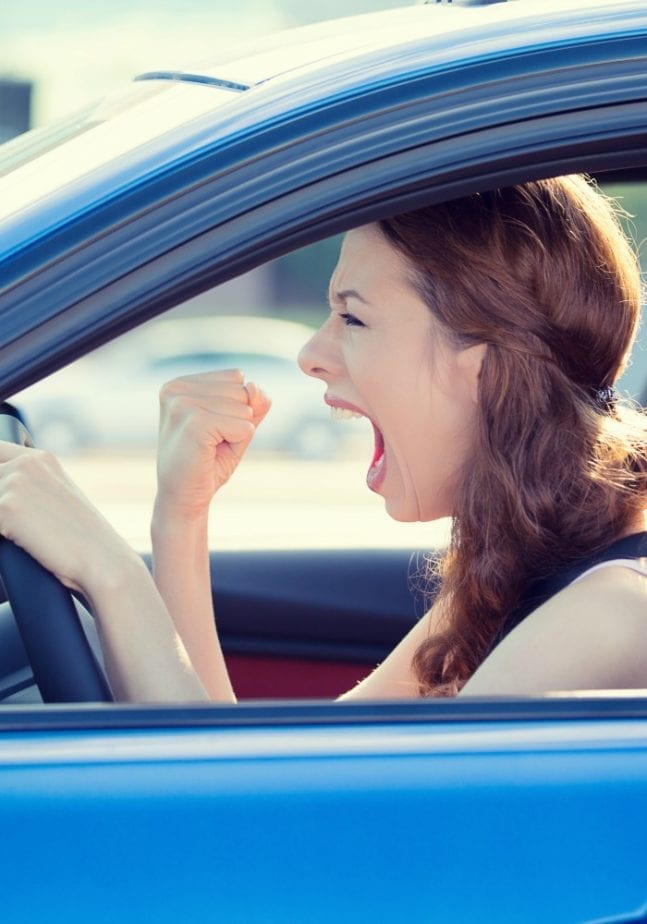 So I’m going to list the four main types of jerk drivers that make me want to undergo DNA splicing where I can become that dinosaur in Jurassic Park that turns full-on bloodthirsty-umbrella-lizard and spits blue venom in the bad guy’s face. 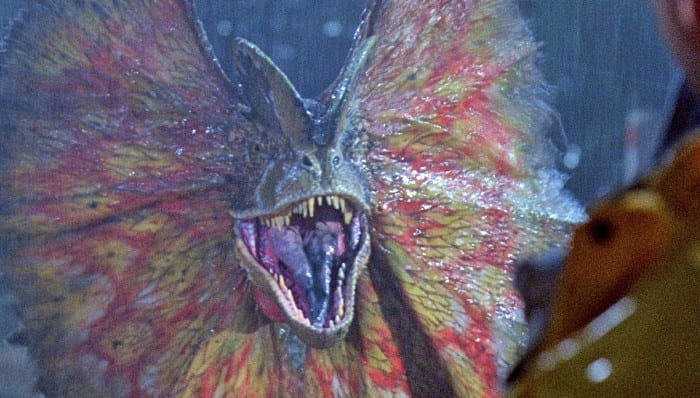 NSFW – The Four Types of Drivers I Loathe

NUMBER ONE: THE SOCCER MOM

What to look for: Messy bun, minivan, “MY KID IS ON THE HONOR ROLL AT . . .” bumper sticker, and exhaust fumes that smell like missed opportunities and defeat.

I believe the soccer mom drives the way she does because she has a death wish. When she puts her car into drive, she is essentially flinging herself off the cliff and waiting for the Void to embrace her. She’s got seven screaming kids in the back, french fries are being thrown every direction, the baby just crapped her pants and somehow got her hands in it and is now daubing fecal war paint on her face, mom’s trying to hand Timmy a Wet-One to wipe off the baby, but Timmy is busy loudly complaining that his iPhone battery is dying and he’s stuck in a cave in Minecraft. Mom’s eye-rolling teenager is in the front seat bitching about not being able to go to the latest SCHEIßEGEHIRN death metal show, I mean, “oh my god, Mom, I’m like FOURTEEN!” …and her husband keeps texting her because he doesn’t want another damned slow-cooker meal tonight.

Yep, mom wants to end it, folks, and she doesn’t care who she takes with her on the way down. 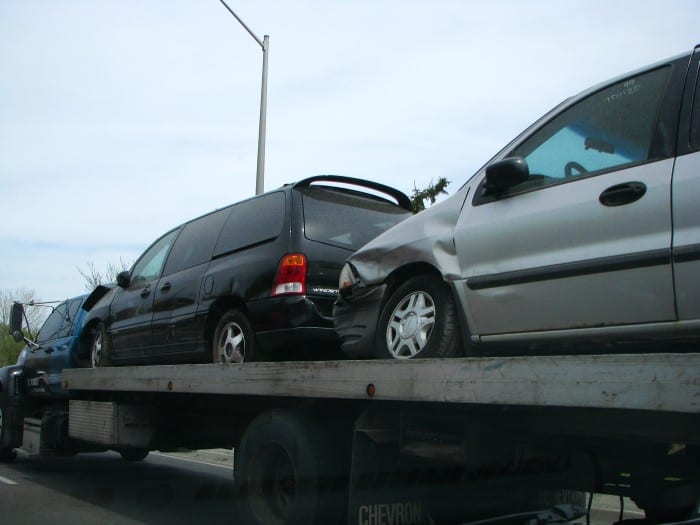 This is a soccer mom funeral procession.

What to look for: Inconspicuous sedans, glassy-eyed drivers, inconsistent speeds, which direction the dirty looks of other drivers are pointed.

These are the people who speed up as soon as you put on your turn signal to come over into their lane. Their subconscious squawks, “MY LANE!” and their foot flexes downward on the gas pedal. Even though they could have just stayed at their current speed and let you over because you weren’t driving slowly and would in no way impede their progress to their destination, it does not matter. Like a toddler who sees another kid holding a toy that they forgot they owned and haven’t played with in months, these folks subconsciously freak the hell out because OH MY GOD NO MINE MINE MINE. And no, they aren’t cute like the seagulls from Finding Nemo when they do that, they’re about as fun as walking through a spider web with your mouth open.

I kind of wish we had proximity messaging, where you could hail them (like in Star Trek) and send a message just because you’re close to them. These people would get constant alerts that, once again, a nearby driver has sent them a message like, “You’re a camel’s leaking chocolate starfish, and you should probably ask for a refund from whoever apparently trained their students to drive like a flock of brain-damaged ducks.” 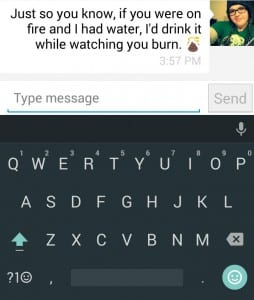 The poo emoji would be put to work, son.

Like the whimsically spastic White Rabbit from Alice in Wonderland somehow getting stuck driving the bus from Speed, these people weave in and out of traffic, overtaking cars and cutting off semis at a breakneck speed, all the while (most likely) screeching, “I’m late! I’m late! KEEP IT ABOVE FIFTY!”

These leprous flesh-tubes of wasted potential don’t care about you, your groceries, your brakes, your car, or your life. They have got to get where they’re going, and they will gladly cause a nine-car pileup on the interstate to do it, because apparently their car will explode if they so much as breathe on their brakes. These are the folks that cut in front of you at CVS and then, when you speak up, say, “Oh, I didn’t know the line started over there!” and finish their transaction anyways.

This driver is the only one on whom their victims can exact vengeance, and it comes rarely: They cut you off, forcing you to slam on your brakes, they speed ahead, then, after you’ve wiped your Starbucks beverage off your face and gone ahead and set an appointment with your local burn center, you notice that the White Rabbit is frantically lane-dancing behind two automobiles who have synced up and are keeping pace to block him because these folks are having none of his shenanigans. The best part is when there’s a red light. Then you get to drive up alongside your enemy and look them in the eye. 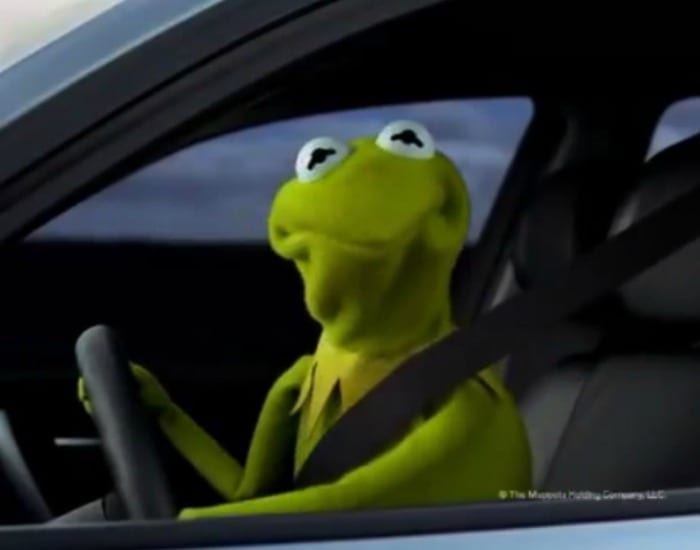 NUMBER FOUR: PEOPLE WHO DON’T USE THEIR F***ING TURN SIGNALS

What to look for: These a-holes are everywhere, man. They’re everyone. Just get in a car and you’ll find one. It’s like the Walking Dead, but with idiots. And there’s nothing you can do about it. God speed, my friend.

Usually, these folks have fairly new cars. It’s probably because they have to buy a new one at least once a year because they crash into people on a regular basis. They obviously have never learned how to lift or lower an 8″ long bar that is clearly marked with turn-signal icons and makes effing clicking sounds whilst flashing bright green arrow icons on their dashboards to show which direction the driver chose to indicate they were going.

Even a parakeet could be taught to use turn signals, but these folks? Nope. Their entire purpose in life is to run through life like a surprise party. Except not a good kind of surprise party. Like a “Surprise, you’re being audited by the IRS” kinda surprise party. Anyways, these jerks confuse the hell out of people when they cut someone off, immediately slow down to a crawl, speed up, slow down again, and then finally turn onto a side street so the people behind them go from being totally normal to HULK SMASH in the span of four seconds.

These folks are the reason that my 18-month-old son’s first sentence will most likely be, “Nice turn signal, you son of a whore!”

I want to get a miniature Louisville Slugger and keep it in my car, and when people don’t use their turn signals, I want to get out of my car, SMASH THE EVERLOVING HELL out of their tail lights, and then shout, “JUST GETTING THOSE PESKY THINGS OFF YOUR CAR FOR YOU SINCE YOU OBVIOUSLY DON’T NEED THEM!” and then jump in my car and peel off, but my husband keeps reminding me that doing such a thing would be a violation of my parole.

So, I simply must be content to hide in my Batcave and consider other ways to exact my vengeance upon these aneurysm-creating bastards, like sneaking into their homes and bending a single tine out of alignment on each of their forks so they have to deal with the mildly inconvenient and maddeningly tooth-scraping flatware forever. Because you know they wouldn’t ever bend them back. Why would a dipshit who can’t even be bothered to use a turn signal spend the time to realign the tines of every single fork they own? 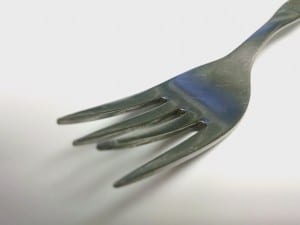 Do you see the evil ingenuity of this?

Alright, readers, now that I’ve successfully stressed myself out by recreating my rage for your reading pleasure, what kind of drivers do you loathe?

Oh Lord, are you from Houston?! You just described my daily life, whether it's actually commuting or just getting to the drug store..

No, but I live in Fort Worth! I'm betting there's a similarity because of the state! :)

PEOPLE WHO DO NOT LOOK BEGORE THEY CHANGE LANES OR TAKE AN ON RAMP.

Your head is on a swivel for a reason, fuckface!!!

I loathe and despise the Right Lane Haters, aka, those that ride in the left lane. I use to drive an hour to work in Ft.Worth and I was ready to make a sign to put in my right backseat window that said..."the right lane is your friend!" so that while I am in the right lane passing the slow people in the left lane, they will see it. :) That and the turn signal ppl are my two biggest driving pet peeves. Like...pluck out my eyeballs kind of pet peeves.

Pretty much 99% of Toyota drivers piss me off. They drive as if they're The Only Yup On The Asphalt, and they truly infuriate me to no end every single damn day.