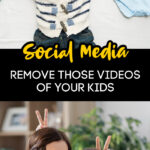 We’ve all seen them. Heck, we’ve probably even done it ourselves.

All those pictures of kids and families living life and having fun on social media — it’s entertaining to watch.

But, parents everywhere have been removing their kids’ photos and videos from social media, and it’s probably a good thing.

Influencers who have kids included in their content have noticed a scary trend.

For example, a TikTok account with more than 17 million followers known as “Wren Eleanor” shares photos and videos featuring a 3-year-old little girl.

Some people have noticed that certain photos of Wren Eleanor have been saved tens of thousands of times.

Others have noticed inappropriate comments on some posts using hashtags like #savewren.

So, that means random people are saving those pictures of kids. That, or they are making inappropriate comments on the photos that are posted online.

There are some things that you simply don’t want people getting a hold of — like pictures of your kids. You don’t know why or what they are going to use those photos for.

And, really. I’d rather not find out.

When you put something out there, you don’t have any control over it. You lose control over those photos. — Anyone can easily copy the photo, tag it and save it and use it for things that you are not intending and maybe not even thinking of.

Don’t Put Pictures Of Your Kids Out Onto The Internet

It’s better to just nip it in the bud and not have those pics of your kids up there to begin with.

Not only are there strange people in this world, those pictures create an electronic paper trail for your kids that won’t go away.

As they grow into adults, it’s possible those pictures could embarrass or harm them in some way.

It’s kind of like how you shouldn’t post suggestive pictures of yourself online, because a potential employer may see them. That’s NOT how you want to present yourself professionally.

That’s basically an electronic paper trail that doesn’t go away for your kids. — So it’s something to really, really think about even as early as when you have a newborn and you’re so excited and you want to share.

5 Tips For Parents When It Comes To Social Media

These tips and suggestions come from Jasmine Hood Miller, and are great reminders for every parent that want to post things about their kiddo online.

Pause Before Posting That Photo Or Video – Should you really post it? Sure, their first bath might be cute as all get out. But, that toddler may not want their college admissions panel seeing it when they are 18.

Beef Up Those Privacy Settings – You can decide who sees your content and who doesn’t. Even if your page is open to everyone, you can choose to make certain photos and posts private — only seen by a certain audience.

Take Advantage Of Photo-Sharing Sites For Family And Friends – Photo-sharing sites require a login — including a password — to access the photos. Sure, you might want grandma to see Freddie singing his first solo. BUT, make it so ONLY grandma (or whoever else has access to your account) can see that photo.

Have Those Conversations With Your Kids About Social Media – You can start this early. Talk to them about posting things, and who can see them. Tell them that once that photo is out on the web, anyone can access it FOREVER. As they get older, they can even tell you what they want posted and what they don’t.