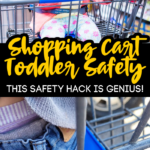 I don’t know what it’s like where you live, but where I live people will take a child right out of a shopping cart.

It’s a scary freaking thing that I have always worried about!

Now my kids are grown and I still worry about them being taken, because I’m paranoid like that.

I do also have a grandson now that is a toddler so when I saw this amazing hack I knew it was something I needed to start doing and definitely will from now on.

I’m sure you’ve seen surveillance footage from stores where a stranger grabs a toddler from a cart as the adult has their back turned shopping the shelves.

It’s scary how quickly it can happen.

Well, with this hack you can make that a lot more difficult for those sickos out and about.

How To Keep Your Child Safe In A Shopping Cart

All that you need is a carabiner!

You buckle your child into the seat as you normally would, but you take one other step that only takes a second.

You just need to clip a carabiner through the loop on your toddler’s pants and clip it to the backrest rails on the toddler seat of the cart.

This also helps prevent those escape artist toddlers from trying to climb out of the cart or at least gives you extra time to catch them before they wiggle too far out.

My grandson is notorious for this, can’t take your eyes off of him for even a second, or his little butt is trying to climb right out of the cart.

Yes, I totally understand that not all toddlers will be wearing pants with belt loops to make this possible, but it’s still a genius idea that could also be used on overalls too!

Safety first! I would love to hear your safety hacks for toddlers in the comments!