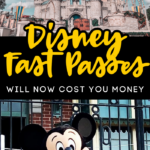 Did you hear the news? Disney World is bringing back FastPasses! Woo-hoo!!

Wait. Before you get too excited. They are going to be changing in a big way. A big, unpopular way.

There was a seemingly useful app that was introduced to Disney Parks this fall.

It wasn’t a fast pass, but it told you the best ways to achieve the shortest wait times possible.

So, let’s say you wanted to hit up Splash Mountain, ride Peter Pan, and eat dinner at Jungle Navigation Co. The Disney Genie app would tell you how to accomplish all your magic plans in the best, shortest way.

Disney Genie — a free service — would literally help you make the best plans to accomplish everything you wanted to do.

From specific attractions, foodie experiences and entertainment, to general interests like Disney princesses, villains, Pixar, Star Wars, thrill rides and more — just tell Disney Genie what you want to do and it will do the planning for you

Well, now the Disney Genie app is going to be in the business of getting you to cut the lines on certain rides.

That’s right. Disney Genie is replacing the old FastPass system with what is now being referred to as Lightning Lane.

But, here’s the catch. The BIG catch.

This feature of the Disney Genie app will be in the Genie+ section, and it costs money. Yep.

So, as if you weren’t paying enough to park and get into one of the Disney Theme Parks, now you have to dish out even more money if you want to bypass the lines.

I can’t even begin to tell you how unhappy I am about this.

The Genie+ Lightning Lane experience is going to cost $15 ($20 at Disneyland) per person, per day. Yes, this is in addition to actually getting into the park.

Oh, don’t worry. Once you pay your money for the day at the Genie+ app, you also get audio experiences centered around different Disney themes — which we USED to get for FREE on the PlayDisney app.

Disney is quick to defend their new money making venture.

You can enter our parks and if you’re not even interested in using ‘Genie,’ you don’t have to. You still have standby lanes, you still have virtual queues at some of our attractions. You can still enjoy the park any way that you want to enjoy it.

Thanks. Thanks for making things harder for those who can hardly afford to take their families to the Disney Theme Parks as it is.

What a magical experience we will have.