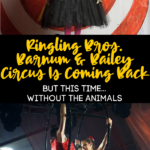 Back in 2017, the Ringling Bros. and Barnum & Bailey Circus closed down 146 years after it opened.

I was sad, but it looks like they could be coming back… but with some changes.

Feld Entertainment, which is the owner of the famous traveling circus, said that a new version of the circus is expected to come back to the public in 2023.

The difference… no animals!

My favorite part of the circus is the human performers, so I am 100% ok with this!

Ticket sales had declined due to what many believe were animal rights protestors… including PETA.

I’ve actually dealt with them getting in my children’s faces and yelling awful things to all of us while we waited to enter the circus.

In 2016 they removed elephants from the shows and ticket sales declined even more.

In 2023 we will be relaunching Ringling Bros. and Barnum & Bailey Circus. You can see it’s emotional and exciting for us as a family. We really feel that Ringling Bros. has incredible relevance to today’s audience.

The relaunch of the circus minus the animals was cheered on by PETA, and again… I am totally fine with there not being animals.

I just wish PETA would tone themselves down a bit, especially in front of children.

The exciting announcement sends a powerful message to the entire industry, something that PETA’s been saying for decades: Cruelty doesn’t belong in the circus or in any other form of entertainment.

PETA said in a statement.

Will you still go to the circus when they relaunch without the elephants, tigers, lions, or other animals?

Love the circus. Such an important part of my growing up. I am excited to see the circus again. A refreshing comeback from days gone by that will bring excitement and admiration of great talent. Wish you luck with this new chapter.