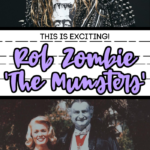 So I’m a bit intrigued. I’m a part-time Rob Zombie fan, some films he has done I thought were brilliant, others, eh… not so much.

The word going around is that Rob Zombie will be directing a new ‘The Munsters’ movie. I can only imagine that this one will not be family-friendly though, so expect it to have an R rating.

Charles Murphy of Murphy’s Multiverse shared the news that Rob Zombie had been hired to write as well as direct a Munsters reboot movie for Universal.

It even appears that the cast has been chosen already! Of course, as with everything Rob does, we know his wife Sheri Moon Zombie has a role. She will take on the role of Lily Munster.

Jeff Daniel Phillips, is said to be cast as the role of Herman Munster. He actually collaborates with Rob Zombie a lot, so no surprise there.

It’s also reported that Dan Roebuck, Jorge Garcia, and Richard Broke have been cast to fill major roles in the film.

The coolest part of all of this though?

Cassandra Peterson will have a supporting role in the movie. You may know her better as Elvira, Mistress of the Dark.

So what do you think? Will you watch it?