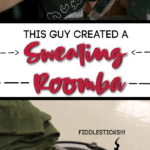 I need to immediately find someone that can do this to my Roomba-style vacuum!!

Actually, I need to GET a Roomba-style vacuum, and then I need to find someone who can do this to the vacuum!!

Michael Reeves — henceforth known as “the genius” — was able to trick out his Roomba vacuum to where it screams and swears cursie words when it bumps into things — kinda like I do when I bump my knee into a table. LOL!!

Usually, people want their vacuums more quiet and efficient, but not THIS genius!!

Michael, who has freaking 5.7 MILLION subscribers, is a technology YouTuber — so he knows how to mess with things and make them cooler. He is known for his potty-mouth and his robots.

Sure, the robots are usually pretty pointless, but they are freaking robots.

I can’t even DRAW a robot, let alone build one.

So, Michael, at the request of his YouTube followers, used his powers of awesomeness to create a Roomba vacuum that is, let’s face it, quite hilarious.

He seems less than enthusiastic when he says, “I hate every single one of you” at the beginning of his Roomba vacuum video.

BUT, he goes ahead and makes the cursing Roomba.

First, he tries it out on his roommates. They seem less than enamored with the little screaming vacuum.

Then he decides to take it to his local TARGET to get some real-life market research.

Now, he DID create a Child-Appropriate mode, in case you get offended easily.

This mode DOES crack me up, but it’s just not the same as the full-on cursie mode.

In the end, Michael concluded that the world just isn’t ready for his Roomba robot creation.

It appears as though our invention is simply too far ahead of its time. The world isn’t ready for the Roomba that screams swear words when it bumps into things and I’m okay with that.

You can watch the entire Roomba robot video HERE — but be forewarned — there are a LOT of level 10 cursies.