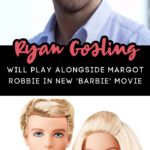 She’s a Barbie girl, in her Barbie world — and that world is about to include Ryan Gosling!!

Margot Robbie is set to bring Barbie to the big screen — yep, that Mattel-made, plastic pop goddess of the toy world. And, she is choosing the best possible guy ever to be the Ken to her Barbie.

I mean, blond hair, good looking — what else do you need in a Ken??

Ryan Gosling was offered the role awhile ago, but initially turned it down. He’s one busy dude, and his schedule wasn’t going to allow it.

Luckily for Margot, and the rest of the planet, the project was pushed back, allowing Gosling to sign on to the part.

According to Deadline, the studio was pretty persistent about Gosling playing Ken. So persistent in fact that Ryan was their ONLY choice for the role.

The stars aligned just right, and an opening appeared in Gosling’s schedule at the exact time the film is set to begin production.

We don’t have any idea yet what the film is set to be about. But really, does it matter?

I am totally here for this film!!

I mean, it’s Barbie. It’s Ken. It’s Margot Robbie and Ryan Gosling. It could be about pretty much anything, and I’d still watch it!

This Barbie flick is going to see Margot Robbie as not only the main character, but she will also be one of the producers, along with her production company, LuckyChap Entertainment, Mattel Films, and Warner Bros.

You KNOW we will bring you more information on this Barbie collab as soon as news drops about the production.

Speaking of Margot Robbie films, did you know that she is set to star in the new Pirates of the Caribbean movie? I can’t freaking wait!!