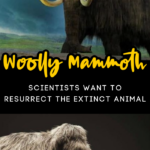 This is seriously some Jurassic Park shiz right here.

Scientists are working to bring the Woolly Mammoth out of extinction, and into the living world.

Am I the only one who sees red flags going up everywhere? I mean, this doesn’t sound like a stellar plan to me. The World, Mother Earth, God, Whatever wanted them extinct. We shouldn’t mess with what the earth wants.

So far, playing God and bringing extinct things back to life has been fodder for the Science Fiction genre of things.

That is, until now.

The field of genetics has increased EXPONENTIALLY in the last couple decades or so. What was once impossible is now realistically within our grasp.

Just look at what DNA has done for forensics!

Scientists have already cloned endangered animals and can sequence DNA extracted from the bones and carcasses of long-dead,extinct animals.

Now, the world hasn’t seen a woolly mammoth in 4,000 years, but scientists are hoping that returning the beast to its natural habitat will improve everything from climate change to helping the Arctic tundra environment.

You may immediately think that scientists are going to extract some DNA from geological finds in hopes of cloning the prehistoric animal, but that’s not what they plan to do at all.

That would be the easy way out. LOL!!

The DNA that they’ve found is still buried in permafrost, and it’s too damaged to use for cloning. The scientists hope to use genetic engineering to make a sort of hybrid woolly mammoth.

[This hybrid animal would be] a living, walking elephant-mammoth hybrid that would be visually indistinguishable from its extinct forerunner.

Is this actually going to happen?

Well, the scientists think they can have the first living woolly mammoth babies (called calves) in about 4 to 6 years.

AND, these scientists just received $15 MILLION to do this very thing.

Did you know that there is already something called CRISPER that actually rewrites life as we know it? Seriously, this is some weird stuff. They have already made a pig that basically has human-like body parts, in the hopes of one day being able to use a pig for things like organ transplants.

Reinventing the pig is a bit scary, but I get it. A woolly mammoth, though, is something different.

The scientists believe they will need to simultaneously program “upward of 50 changes” to the genetic code of the Asian elephant to give it the traits necessary to survive and thrive in the Arctic.

They plan to program a cell with the mammoth changes that they are seeking. Then, they will use an artificial womb to grow the baby — which should take about a 22 month gestation.

Now, don’t immediately worry. They aren’t to the point of growing a prehistoric animal — yet.

There are skeptics — besides me — to messing with the genes of anything.

I still wonder what the bigger point would be. First of all, you’re not going to get a mammoth. It’s a hairy elephant with some fat deposits. We, of course, have very little clue about what genes make a mammoth a mammoth. We know a little, bit (sic) but we certainly don’t know anywhere near enough.

Love Dalén, professor of evolutionary genetics at the Centre for Paleogenetics in Stockholm

There’s also the whole ethical question. Is it ethical to use live elephants as surrogates? Having a giant mammoth baby just might kill the momma elephant.

If it doesn’t work out for the mammoth in the Arctic, are they just going to stick all the mutant babies in zoos for people to gawk at?

Yep. To me, this whole program just screams, “Nope!”

I guess time will tell what happens. Maybe I’ll bump into you when we visit the real-life Jurassic Park.