“He ran head-first through a crowded parking lot. Terrible Twos? Am I right?”

“It’s okay if he had a meltdown during his baseball game and had to be drug off the field. Boys will be boys.”

“So he spent all day at school hiding under his desk, hands cupped over his ears, screaming at the floor, that’s…normal? Right?”

Hopefully you’ve never had to ask these questions, but the parents of 3.5 million Americans with autism probably have. My son, Colby, has autism. Not that you could tell at first. If I mention his condition to any of my friends, they will look at me cross-eyed. They can’t believe this funny, outgoing, athletic doofus could have what Rain Man’s brother had. I admit, it does seem impossible…it seems impossible until you catch him rocking back and forth in a corner, glassy eyed and absently gnawing on the corner of a Lego block. My son has autism and for a while I was in total denial… 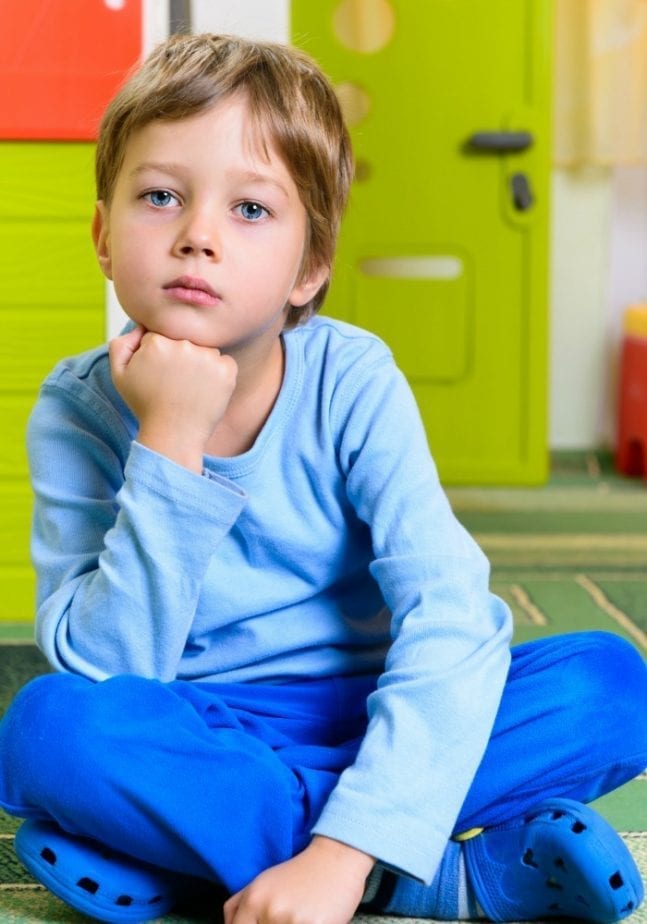 So Your Child Has Autism And You Have Denial

Colby was a perfect baby. He cooed, smiled, and laughed. As he grew older, he wasn’t picky about what flavored paste you shoved into his wet, slobbering gob. He was ugly, though. I mean, like, something you might find hidden beneath the floorboards of an Edger Allen Poe story, kind of ugly. He was jaundice and skinny due to his refusal to learn how to nurse. Looking back, autism was most likely to blame, but it left him looking like a shaved, yellow monkey. We simply didn’t see the signs then, not until he turned two.

It was like a switch flipped in his brain and the kid lost his freaking mind. He would randomly break out of our hands and bolt off into whatever direction he happened to face. Didn’t matter where. He would take off at the zoo, down the aisle of a store, or even in a busy parking lot. I blamed it on him just being a boy and, you know, kind of stupid. But as the terrible twos moved on through the threes and neared the fours, I was the one starting to look, you know, kind of stupid. My wife saw the problem almost from the start, but I, like most people, thought autistic kids sat quietly at a piano and talked like a robot like that kid in The Baby-sitters Club #32, Kristy And The Secret Of Susan.

There was nothing quiet about my sons’ autism. It was heartbreaking to watch helplessly as his Pre-K teacher had to drag him out of the hallway and into the classroom every morning. Everyday I had to hear about the meltdowns. Everyday he would crawl under his deck and cover his ears and scream. What are you supposed to do with that? What’s the teacher supposed to do? He finally had a massive meltdown during his first baseball game. I don’t know why. He just stood there, the other kids teasing him. He screamed at the sky until his mother ran out onto the field, carried him off, and we brought him home. I finally had to admit to myself that something was wrong.

We booked him for a screening, and guess what? He had autism. Just like my wife had suggested months before. If I had simply listened to her and not made excuses, we could have saved my son months of teasing and fighting. We could have saved ourselves the teacher meetings and awkward public outbursts. I respect that my wife respected my opinion enough to not nag about the issue, but looking back, I wish she had just punched me in the dick and taken our boy to a doctor despite my fatherly “wisdom”.

Listen, you’re a smart person. You read all the right books. You’re smart enough to understand that 30 Rock is the funniest show ever. You probably think you can tell if your kid is being a normal goof or has something like autism. But guess what? You can’t. You don’t know what’s going on inside that skull full of mush, and giving up that illusion is the first step to saving your kid. Autism is a deceitful condition. Autism can be bookish, it can be socially awkward, it can be quiet, it can be embarrassingly loud and painful to watch because autism does not care that you’re at a baseball game, it does not care that you’re at Sunday school. Autism doesn’t care if it drives away friends or makes children feel weird and alone. Autism does not give a damn about what you look like in front of the neighbors and the other parents at school.

If your child’s terrible twos have become terrible fours, your not doing yourself or your child any favors by ignoring the problem. Set up a screening with your doctor. The screening is easy. The doctors just watch your child play with toys for a while. My son actually had fun. He got to behave in whatever way felt natural for him and nobody berated him. And after his diagnosis, we adjusted his play habits, his diet, and with a little maturing, he’s turned into an awesome kid. If your child’s future is worth anything to you, you’ll stop making excuses. And if your husband gives you any hassle, just punch him in the dick. He’ll thank you later.