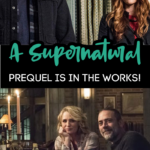 I was SO upset when Supernatural came to an end. It was like a whole in my media heart couldn’t be filled!

So when I heard the news that a prequel is in the works, thanks to Jensen Ackles, I was like HALLELUJAH! Entertainment Weekly has officially confirmed this is going to be a thing, so I’m officially doing a happy dance!

This new show is going to follow the storyline of Sam and Dean’s parents, John and Mary. Jensen Ackles and his wife are co-executive producing it, so you know it’s going to be awesome!

But don’t worry, Ackles won’t just be helping with production, he’s going to narrate the show too!

“After Supernatural wrapped its 15th season, we knew it wasn’t over. Because like we say in the show, ‘nothing ever really ends, does it?'” Jensen Ackles said in a statement obtained EW. “When Danneel and I formed Chaos Machine Productions, we knew the first story we wanted to tell was the story of John and Mary Winchester, or rather the Supernatural origin story. I always felt like my character, Dean, would have wanted to know more about his parents’ relationship and how it came to be. So I love the thought of having him take us on this journey.”

This prequel is set to be called ‘The Winchesters’, and will hopefully be the first succesful spin-off from the show. Previously, there were ‘Supernatural: Bloodlines’ and ‘Wayward Sisters’, which both tanked.

There is no doubt that I will be watching this the second it comes out, even just to hear Jensen’s voice again. What are your thoughts on this hopeful prequel?