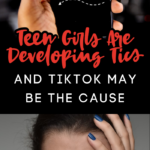 More than ever, teen girls are showing up to doctors offices with complaints of strange tics, and it just might be depression, anxiety, and — of all things — TikTok that’s to blame.

I’ve known several boys — ‘er men — with mild forms of tics — one even has full-blown Tourettes — and it always started when they were young-ish, and got worse as they got older.

For most of these guys anxiety was seen as the main culprit, although what actually causes Tourettes can be a mystery.

If you aren’t familiar with Tourette Syndrome it involves a spastic, often repetitive, involuntary body movement (it can be eye tics, head tics, or it can even affect your arms and legs) or uncontrollable sounds (sometimes words, sometimes just noises).

Tics typically show up between ages 2 and 15, with the average being around 6 years of age. Males are about three to four times more likely than females to develop Tourette syndrome.

Which makes all these females showing up to doctors with Tourettes so unusual and baffling.

Some medical centers are seeing as much as 10 times their usual cases of tics. Before the pandemic, centers would see one or two cases a month, but now some say they’re seeing between 10 or 20 a month.

Psychiatrist Dr. Kirsten Müller-Vahl from a medical school in Hanover, German, has been seeing a rise in female Tourette patients since 2019, although the problem has gotten worse since the pandemic.

The Tourette’s ward she was responsible for was flooded with patients with symptoms she couldn’t explain. There were dozens of teens and people in their 20s who were never diagnosed with Tourette’s syndrome, but suddenly began to suffer from the “tics” that characterize it.

What made this even more baffling were the KINDS of tics that were being seen. Tics are usually “unique to each person,” but there were girls showing upn that all had the same exact tics going on.

It turns out, all these girls were followers of YouTube influencer, Jan Zimmermann, who has amassed more than 2 million followers on the platform.

See, Jan has Tourette Syndrome, and his specific tics show up as shouting “flying shark,” “you’re ugly,” and “heil Hitler.”

In actuality, these kids didn’t have Tourette Syndrome at all. What they had is known as Functional Movement Disorder (FMD), which is where people can develop tics caused by environmental or psychological causes.

Some girls were shouting out “BEANS” in a British accent.

In Chicago, Caroline Olvera, from the Rush University Medical Center, noticed many patients were using a British accent to blurt out the word “beans.” This was even happening to patients who didn’t speak English.

She was able to pinpoint this particular tic to a British TikTok Influencer who would — you guessed it — randomly blurt out the word “BEANS!”

What appears to be happening is, these kids spend ALL DAY watching TikTok video after video that feature people with Tourette Syndrome (Thank you, TikTok algorithm), and they are developing FMD, which is causing them to mimic the people they are watching online.

In the past, experts called such occurrences “mass hysteria.” Today it’s referred to by a more politically correct term, Mass Psychogenic Illness.

According to Robert Bartholomew, a clinical sociologist, these types of outbreaks have been happening all throughout history. They are often a result of “the most common fears of the period.”

This FMD might just be related to anxieties over common fears relevant today.

“In the 17th century we had witches, today it’s technology,” he said.

The development of these tics even has a name, if you can believe it. “TikTok Tics.”

If your child starts to develop these TikTok Tics, you should ask them about the videos they have been spending their time viewing. It is also suggested that they take a bit of a holiday from social media so they aren’t influenced to keep on tic-ing.

Additionally, if a kid exhibits tics that interfere with daily life, parents should seek out specialists.