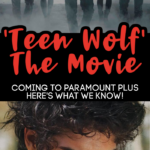 I have to start this out by saying, no one… and I mean NO ONE can top Michael J. Fox as the OG ‘Teen Wolf’.

The movie came out back in 1985 and remains one of my favorite movies today!

In 2011 MTV made a television series by the same name and brought the ‘Teen Wolf’ character to a new generation of people.

It was loosely based on the movie with Michael J. Fox and was on for 6 seasons, ending in 2017.

I have to be honest, I’ve never watched the television series, so I think I need to check it out.

The creator of the television series, Jeff Davis, announced that he is bringing back ‘Teen Wolf’ but as a movie that will air on Paramount Plus.

A terrifying evil has emerged in the town of Beacon Hills. The wolves are howling once again, calling for the return of Banshees, Werecoyotes, Hellhounds, Kitsunes, and every other shapeshifter in the night.

According to Variety there will be some familiar characters in the movie.

But only a Werewolf like Scott McCall, no longer a teenager yet still an Alpha, can gather both new allies and reunite trusted friends to fight back against what could be the most powerful and deadliest enemy they’ve ever faced.

I’m guessing that means that Scott McCall will be a major part of the new movie, in fact, Tyler Posey who played the character already posted on social media that he was returning.

The following people have confirmed on social media that they will be involved in the new movie.

The rest of the old cast hasn’t confirmed anything yet, and there haven’t been any official announcements made about who all is involved.