This Terrifying Fish Normally Found Thousands Of Feet Deep In The Ocean, Washed Up On A California Beach 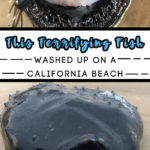 A GINORMOUS fish — that looks a little like the scary fish that tried to eat Marlin and Dory in Finding Nemo — washed up on a California beach, and it looks terrifying.

I’ll be the first to admit — I don’t like fish.

Because all I can think of are the big, ugly, scary fish that exist, and I either start choking or I panic in the water!!

Just take a gander at this angler fish — known as the Pacific Football Fish — that washed up on a beach in California!!

This sucker has needle sharp TEETH, and what looks like a hand coming right out of top of its head — that’s a big NOPE for me!!

I’m telling you — it totally reminds me of that terrifying fish that Marlin and Dory meet at the bottom of the ocean in Finding Nemo.

There is a reason that this Pacific Football Fish resembles that beast from Finding Nemo that lives at the bottom of the sea.

This type of angler fish usually lives deep in the ocean — thousands of feet below the surface.

It usually doesn’t swim amongst the tootsies of beachgoers!!

I may never go in the ocean again!

Forget sharks! I’d be the lucky one to come out of the water with this thing attached to my leg.

To see an actual angler fish intact is very rare and it is unknown how or why the fish ended up on the shore.

Seeing this strange and fascinating fish is a testament to the diversity of marine life lurking below the water’s surface in California’s MPAs and as scientists continue to learn more about these deep sea creatures it’s important to reflect on how much is still to be learned from our wonderful ocean.

Exactly — you never know what you’re going to find when you step foot in the waves of the ocean!!

I love the beach as much as the next person, but perhaps I’ll just stay on the sandy shores with my cozy beach towel from now on!!

1 shares
Costco Is Selling A Giant Tent That Is Perfect For Family Camping Trips
← Previous
Home Depot Is Selling A Hanging Swing Lounge Chair and I Need One
Next →
Click here to cancel reply.