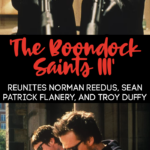 ‘The Boondock Saints’ is one of my all-time favorite movies and normally I’m not a fan of continuations, but I want this… I really want this.

If you’ve never watched ‘The Boondock Saints’, why???

You’ll see Norman Reedus before he became the greasy and grungy Daryl Dixon from ‘The Walking Dead’.

Seriously, ‘The Boondock Saints’ is a great movie that I don’t feel like nearly enough people have seen to appreciate it.

Part two was a little less awesome, but I still liked it and am super excited to see the third installment of my favorite Irish brothers.

Norman Reedus and Sean Patrick Flanery are brothers in the film that have a very spiritual encounter that completely changes everything, I don’t want to spoil anything for those that have never watched it.

The fans have loved these characters for 20 years. They use terms of endearment like ‘the Brothers’ or ‘the Boys.’ We left them in jail at the end of Boondock 2 and fans want to know what happened to them. Norman and Sean have been a driving force to keep this franchise on track and break some new ground story-wise. The fans have been waiting. They literally ask about it daily, and I am really excited to be working with Impossible Dream to make Boondock III a reality.

They are joining up again with director Troy Duffy for ‘The Boondock Saints III’ and will begin shooting the film next May.

The third film picks up where the second ended, with the brothers behind bars, I’m anxious to see them free and cleaning up the world again.

I can not wait, who’s with me?