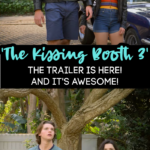 Netflix released the official trailer for ‘The Kissing Booth 3’ and this will be the final film in the trilogy since Elle will be headed off to college.

Then, of course, one of my favorite actresses of all time, Molly Ringwald as Mrs. Flynn!

I mean she’s in like most of my most favorite movies, 80s movies were (and still remain) the best!

Elle, Noah, and Lee need to convince Mrs. Flynn to let them use the beach house for the summer, and even promising that they will take amazing care of it.

I don’t think the parties were mentioned though… oops!

Elle and Lee found their old “Beach Bucket List” and decide that now is the time to get it all done since this is the last summer before college.

They do things like swimming with the sharks, jumping off of cliffs, sumo wrestling, and sky diving, TONS of exciting adventure!

They decided to debut the trailer today to celebrate International Kissing Day, did you kiss someone today?

Check out the trailer below and let me know what you think!