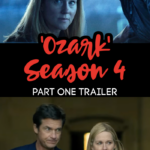 Ahhhh! I am so freaking excited for season 4 of ‘Ozark’!

Finally, the season 4 trailer for ‘Ozark’ is here and I got a little taste of one of my all-time favorite actors, Jason Bateman!

If you have never watched ‘Ozark’, I suggest you start binge-watching now, it’s an amazing show especially if you love crime drama!

The series is based around the Byrd family, Marty Byrd is played by Jason Bateman and he killed this role!

Laura Linney plays Wendy Byrd which is Marty’s wife in the series.

The newest season is also going to be the last season which makes me super sad, but all good things must come to an end I guess.

Season 4, the final season of ‘Ozark will be split into two releases, the first being 7 episodes, then we wait again.

Really, I mean, I think for all of it, Marty and Wendy for the first time are going to be firmly on the same page. Ruth’s going to sort of be in firm opposition to them, everyone’s got to figure out what they want their life to be,” Mundy revealed last year. “For the first time, I think people are going to get to make some choices and not just be reactive to the craziness, that’s around them, and so, we feel like the end of the show has been built in. But hopefully, it’s something that as you’re experiencing it, you’re continually surprised.

After the first half of season 4, we will have 7 more episodes released for the second half.

Who Is In Season 4 Of ‘Ozark

When And Where Can You Watch ‘Ozark’ Season 4?

Watch the trailer for ‘Ozark’ Season 4 Part 1 below and let me know what you think in the comments!