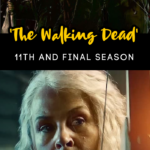 They just premiered the trailer for the ELEVENTH season of The Walking Dead, and it looks crazy good!

Now, this is going to be the LAST season for The Walking Dead, so we can expect it to be over-the-top epic.

I’m going to be honest, it’s been a minute and a half since I’ve watched The Walking Dead.

I used to be one of those die-hard fans who would watch the episode, then stick around for The Talking Dead. I would read blogs and articles about the show. I would watch YouTube theory videos.

But, then they killed off Glenn in the most brutal way imaginable, and I just never tuned back in.

That all may change, though, with this new season. Watching the trailer for season 11 of The Walking Dead has started an itch to get back into the show, and I just may need to scratch said itch!

TBH, I don’t even know who exactly is still on the show. Negan pummeled Glenn to death with “Lucille” and the world went a little black for me.

From the trailer for season 11, we see that Daryl, Carol, and Maggie have reunited and Negan is still around.

It looks like the survivors of season 10 are going to try and rebuild Alexandria (once again), but all hell is going to break loose.

The trailer for the new season of The Walking Dead premiered to an eager audience at the San Diego Comic-Con 2021, and the trailer does NOT disappoint.

This upcoming 11th and FINAL season of TWD looks like it is going to be the most gory, gruesome, and action packed yet.

We’re back to our big, scope-y, massive, just extravaganzas with lots of great character interactions between the people we love. But also our stunts and scares and all of that fun stuff that I think is, for all of us working on it, part of the joy of working on this show. Season 11, we kind of go in hard with some new stories, and new characters, and I’m really excited to share it with the audience.

Now, if you are like me, and need to get caught up on all the TWD action, you can catch the first 9 seasons of the show on Netflix.

Season 10 is available on AMC+ (where you can take advantage of their 7-day FREE TRIAL).

As for season 11, it is going to be an action-packed 24 episodes, that will be split into 3 (3 different 8-episode mini seasons, if you will, 11A, 11B, 11C) — all culminating in the series finale, which you sure aren’t going to want to miss!

You can see the season 11 trailer for The Walking Dead HERE.