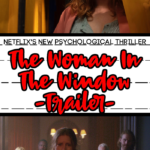 Finally, ‘The Woman in The Window’ trailer is here! The movie had an original release date that was set for nearly two years ago!

This is Joe Wright’s adaptation of A.J. Finn’s bestseller for Netflix. Now when I first heard the name, I totally thought this was going to be another version of ‘Rear Window’ or ‘Disturbia’, however… after watching the trailer, it isn’t at all!

Yes, it does have someone watching others from her window. But this truly is different and you’ll see what I mean when you watch the trailer.

The movie was originally going to be with Fox 2000 and then Disney bought Fox and it was shelved. The original date for release was October 2019, then it was pushed to May 2020, then completely yanked.

Last summer Netflix picked it up and now we have a new release date of May 14th and I can not wait! It looks so good!

Anna Fox (Amy Adams) is an agoraphobic child psychologist who finds herself keeping tabs on the picture perfect family across the street through the windows of her New York City brownstone. Her life is turned upside down when she inadvertently witnesses a brutal crime.

Amy Adams plays Anna Fox, the main character in the film. You may recognize her from her reoccurring roles as ‘Lois Lane’.

I can’t wait to watch ‘The Woman in the Window’ which will launch on Netflix on May 14th, 2021. Watch the trailer below and let me know what you think!

2 shares
You Can Plant Kaleidoscope Roses In Your Garden To Bring More Color To Your Life
← Previous
This Tiny Chihuahua Can't Walk And Became Best Friends With A Pigeon That Can't Fly And The Photos Are Adorable!
Next →
Click here to cancel reply.