This Tiny Chihuahua Can’t Walk And Became Best Friends With A Pigeon That Can’t Fly And The Photos Are Adorable! 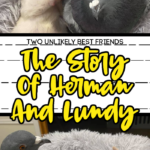 So, let me tell you about Herman and Lundy, an unlikely pair that became the best of friends. Lundy is a Chihuahua puppy that can’t walk, and Herman is a Pigeon that can’t fly.

They’re also a non-profit organization, so be sure to check them out! What they do is amazing and life-saving.

Herman was found in a parking lot of a car dealership, the poor little guy had been sitting there unable to move for 3 days! He had neurological damage and couldn’t fly, so he just sat there.

Sue Rogers, the founder of The Mia Foundation stepped in when local wildlife rescuers wanted to euthanize him. Herman is still with her!

The Chihuahua puppy, Lundy, was brought in by his breeder because he could not use his hind legs. This is called swimmers syndrome and is likely due to a damaged spinal cord.

Sue decided to put the two boys together and see what happened. They immediately cuddled up together!

Thursday night I took Herman out of his playpen to give him some time out and I put him in a dog bed. Then I had to tend to Lundy so I put Lundy in with him. They just looked really cute together so I took some pictures and posted them to Facebook and the next morning it was crazy.

Posts of the unlikely pair went viral really quickly, I mean how can you resist this??

Just from a simple picture of a pigeon and a puppy being shared, we’ve already brought in over $6,000 in donations.

All Of The Good Feelings!

This story gives me all the good feelings and I definitely needed that today! Herman and Lundy were definite friendship goals!

Herman raised up a good puppy! Look how sweet they were in this photo above. Sadly, Lundy has since passed, but Herman is helping to raise up other puppies now!

Look how cute Herman’s friend Fin is!!! Well, it doesn’t stop there, Herman has all kinds of puppy friends these days! You can learn more about The Mia Foundation by clicking here.

4 shares
Watch 'The Woman In The Window' Trailer, Netflix's New Psychological Thriller!
← Previous
Nurses Are Making Warm Gloves For Covid Patients To Mimic Human Contact And My Heart Is Full
Next →
Click here to cancel reply.