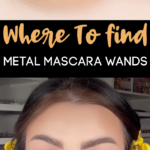 Most mascaras typically have bristles made of flexible plastic, that is until now.

Thanks to social media, a few individuals on TikTok have spotted the new mascara that looks completely different from the rest.

Neogen Dermalogy has created a new type of mascara that is unlike its competitors, including a metal wand and omitting bristles.

TikTok user @mikaylanogueira who tested the mascara herself was skeptical at first until she put on a few coats to show the final look!

The packaging even looks similar to liquid eyeliner and the wand itself is very thin.

The TikToker tried on the mascara and after a couple of coats, the difference from one eye to the other was clear; the mascara works!

You can find the mascara in a few different varieties, including one that’s even extra volumizing on Neogen Dermalogy’s website to make a great stocking stuffer this Christmas.