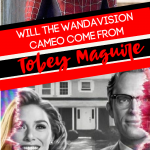 There is going to be an Epic MCU cameo in WandaVision, and we have a guess at just who that might be.

Are you confused and straight up scratching your head about WandaVision?

The first couple episodes were a bit weird and tough to get through, but by the time you hit episode 4, you go, “Ohhhhhh. Here we go!!”

Side Note: Might I suggest you go back and watch episodes 1-3 after you see episode 4. It will make WAY more sense.

NOW, we learned that sometime in the next 5 episodes, there will be a cameo of EPIC proportions.

Like, think Luke Skywalker showing up at the end of Star Wars: The Force Awakens — Or, Luke showing up in The Mandalorian.

We know that WandaVision is leading up to something HUGE.

It is already known that WandaVision is paving the way for the movie Dr. Strange And The Multiverse Of Madness.

So, you can pretty much bet that Dr. Strange is going to make an appearance in WandaVision, but that’s expected. No big secret there.

But, did you also know that WandaVision is going to play into Spider-Man 3 somehow? Gah!! I’m dying.

Elizabeth Olsen (Yes. She is the sister of The Olsen Twins.), who plays Wanda, made a comment in an interview with TVLine that confirmed that there will be a HUGE secret cameo at the end of WandaVision.

Paul Bettany, who plays Vision, also let it slip that he is going to get to work with an actor that he’s always wanted to work with.

I think they are going to be massively surprised by the end of the show. I mean just, people are really going to be like ‘OH MY GOD!’ and they’re going to look at the MCU in a whole new light, and also have a much deeper understanding about in what direction it’s moving.

Paul Bettany in an interview with the Lights, Camera, Pod Podcast

There is this thing that is being kept COMPLETELY under wraps that happens, and I work with this actor that I have always wanted to work with, and we have FIREWORKS together, and the scenes are great.

Paul Bettany in an interview with the Lights, Camera, Pod Podcast

Who do you think will make the surprise cameo?

The Cosmic Wonder thinks that the surprise cameo might just come from — drumroll, please — Tobey Maguire, who previously played Peter Parker, aka Spider-Man, in the MCU franchise.

This would make total sense, since WandaVision is going to tie into Spider-Man 3 in some way, and it has already been rumored that Tobey Maguire is going to show up in Spider-Man 3.

AND, The Cosmic Wonder hits the nail on the head when he says, “Tobey is an OG. He is the OG Spider-Man, at least as far as movies are concerned.”

What do YOU think? Is Tobey Maguire going to make an appearance in WandaVision??