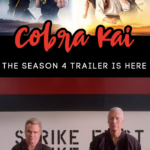 Netflix has finally released the trailer for the 4th season of Cobra Kai, so you better bust out your best karate gi — because the wait is finally over!!

Can you believe the show — which is set to drop it’s latest season at the end of this month — is FOUR seasons old?!? That hardly seems possible.

The 3rd season of Cobra Kai was released almost a year ago, and we have been waiting — only semi patiently — for the 4th season to get here. The time is FINALLY upon us, and I’m Giddy!

At the end of last season, Daniel and Johnny were finally putting their differences aside to team up and take down Kreese.

In the season 4 trailer we get a glimpse of just how well (or maybe not) that collab is going.

I mean, Daniel and Johnny have been at odds since the 1980s. It’s going to be a bit of a bumpy road to get to a smooth sailing partnership — even if they do have a common enemy in Kreese.

Season 4 finds the Miyagi-Do and Eagle Fang dojos joining forces to take down Cobra Kai at the All Valley Under 18 Karate Tournament… and whoever loses must hang up their gi.

With so much at stake, is the alliance going to stand strong?

As Samantha and Miguel try to maintain the dojo alliance and Robby goes all in at Cobra Kai, the fate of the Valley has never been more precarious.

At the end of last season, they teased that Kreese was going to bring back Terry Silver, the totally villainous dude who you know from Karate Kid III. Kreese’s plan is to use Silver to help defeat the LaRusso / Lawrence duo. We finally get to find how it is all going to play out!

What tricks does Kreese have up his sleeve? Can Daniel and Johnny bury their decades-long hatchet to defeat Kreese? Or will Cobra Kai become the face of karate in the valley?

Don’t worry about this being the end for our favorite kids from the valley. The powers that be over at Netflix have already renewed the show for a fifth season!! *Yippee!!*

You can see the trailer for Cobra Kai Season 4 below.