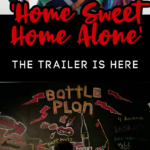 There are some movies that you just don’t remake. They can have sequels, but to reboot a classic that is so incredibly recognizable and popular borders on blasphemy.

The Princess Bride, The Three Amigos, The Notebook, The Breakfast Club, Reality Bites, and Dazed and Confused are some great examples of movies you just don’t touch for a remake.

Another one that I’d put on the Do Not Reboot list is Home Alone. Home Alone, the OG, is such a classic, it is a Christmas tradition FOR SURE.

But, Disney is about to remake the movie, and I’m totally internally cringing.

Y’all I want to think positively. I really do. But, to reboot such an iconic picture takes some guts. I’m so scared they are going to ruin it.

This version of the film doesn’t include the traditional “Wet Bandits.” We actually get a male and female duo, who disrupts Max’s solo Christmas to steal a priceless family heirloom.

Max Mercer has accidentally been left at home while the family takes off for a Christmas trip to Tokyo. And, just like the original, hilariousness ensues.

We are told there are tons of house traps, some trampolines, and even a few cameos from the OG Home Alone.

Y’all. For realz. I’m scared. The original Home Alone is just about perfect. To remake it walks the line of being sacrilege to the original.

It is confirmed that Buzz McCallister (Devin Ratray) is going to show up as a police officer.

Original series star Macaulay Culkin’s Kevin McCallister has been confirmed for a cameo appearance alongside Ratray’s Buzz, but it looks like Disney is holding that reveal for the film’s release.

They are saying that this Home Alone (titled Home Sweet Home Alone) is going to follow basically the same formula as the original, although it will differ in characters. So, it will appease those die-hard OG Home Alone fans, but it will also be good for those peeps who want an entirely fresh film.

Not only is it the same formula, but if you watch the trailer for Home Sweet Home Alone, it is basically a shot for shot homage to the original.

Now, the film will not be exactly shot for shot. It may have the same formula, but it’s going to differ in the bandits, the characters, and a bit of the storyline.

I’m just going to think of this as the sixth film in the franchise, and not think of it as a reboot. Maybe I’ll be more apt to like it that way.

Home Sweet Home Alone is scheduled to premiere exclusively on Disney+ on November 12, 2021

You can see the trailer for the new Home Sweet Home Alone HERE.