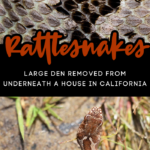 A lady in California found a den of 90 rattlesnakes under her house, and this just might be my nightmare.

Make those venomous Nope Ropes, and I’m completely out. Just burn it all down!

The lady knew there were SOME snakes under her house. She called Sonoma County Reptile Rescue to help her get rid of whatever snakes were under there.

When the reptile rescue got there to check out the situation, they were in a bit of shock.

Now, rattlesnakes aren’t uncommon in California. They wind up under people’s houses all the time. When I lived in Southern California, I had to call and get 3 of them removed from my property. It happens.

BUT, what the reptile rescue found was a little bit astonishing.

Under her house, this woman unknowingly had a full-blown den of rattlesnakes. I’m talking, there were several generations of the creatures just hanging out and enjoying their home.

This particular rattlesnake den had over EIGHTY (80!!) snakes, all twisted and tangled together.

I got a call from somebody that said they had snakes under their house, 3 hours and 45 minutes later This is what I came out with, what would you do.

I know what I would do. I’d scream and run. No joke. I’d be out of there so fast. I’m talking, I wouldn’t even pack my bags. I’d leave and never come back.

Y’all. The snake rescue came out 2 more times, and found 7 more snakes!! AND, they said there would probably be more, because of the nature of the foundation and surrounding land.

[The snake rescue] said the snakes were northern Pacific rattlesnakes, which, according to Seattle’s Burke Museum, give birth to 4–21 live young between the months of August and October. Many females will often gather at a single den to give birth, the museum said.

The snakes will kill small animals (birds, reptiles, mammals, etc) using their deadly venom. They then eat their prey by swallowing it whole.

They say that rattlesnakes only bite humans if they feel threatened — but I’m going to go out on a limb and say you shouldn’t test this information!

If you DO get bit, you need to immediately seek medical help and get some anti-venom. Don’t wait.