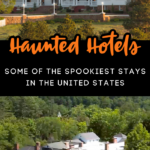 I stayed at a haunted hotel once. Notice I didn’t say I slept at said hotel. I was too terrified. We didn’t see anything spooky, but we definitely heard enough to make me never go back.

That haunted hotel was The Arlington Hotel in Hot Springs, Arkansas, and it tops my list of haunted hotels that you just might want to visit. 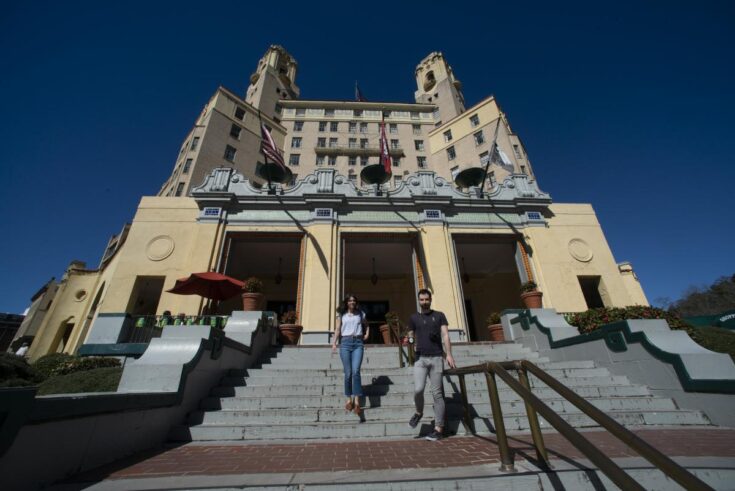 This used to be a famous hangout for Al Capone -- in fact, they have the room he actually used to stay in cordoned off and marked with a placard. It is said that there are tunnels under the hotel that the gangsters used to escape when the police would come sniffing around.

Now, this hotel is fancy. It's a luxury hotel with a full service spa that includes a dip in the famous Hot Springs Thermal Water. It is definitely an experience to try at least once.

Besides Al Capone, many famous people have stayed here including Theodore Roosevelt, Bill Clinton, Andrew Carnegie and Joe DiMaggio. And, of course, me. *Smile*

I'm sure you are familiar with this hotel, even if you don't know it. The Stanley Hotel, in Estes Park, Colorado, was the inspiration for Stephen King's 'The Shining'.

Guests at this hotel say that you can "hear the sounds of untraceable piano music and maniacal laughs throughout the hotel. These happenings are attributed to the playful spirits of deceased employees and guests."

They even have a Stanley Night Spirit Tour, if that kind of thing interests you. Or, you could always ask the staff about all the supernatural things that go on -- they would know!! 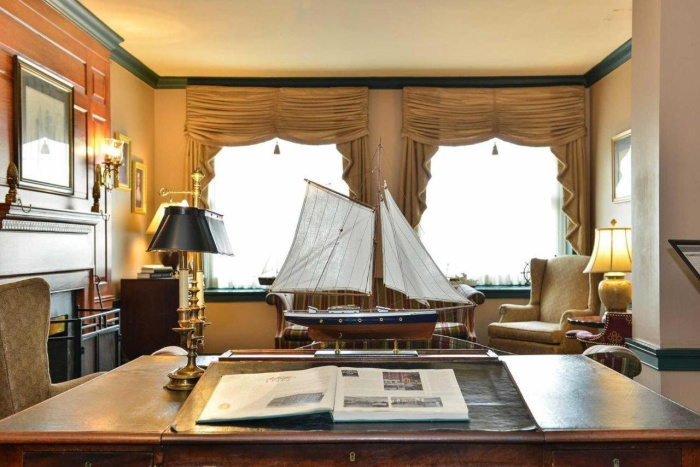 "The Fell family, Quakers from Lancaster, England, founded Fell's Point in 1730." Just the sheer fact that this INN is that old, you KNOW there are going to be some happy haunts and spooky encounters.

This is an internationally acclaimed hotel, and people come from all over to experience the boutique-style rooms and its close proximity to all that the waterfront community has to offer.

As for the spooky, "guests have often reported seeing floating sailors and disappearing butlers knocking on their doors." 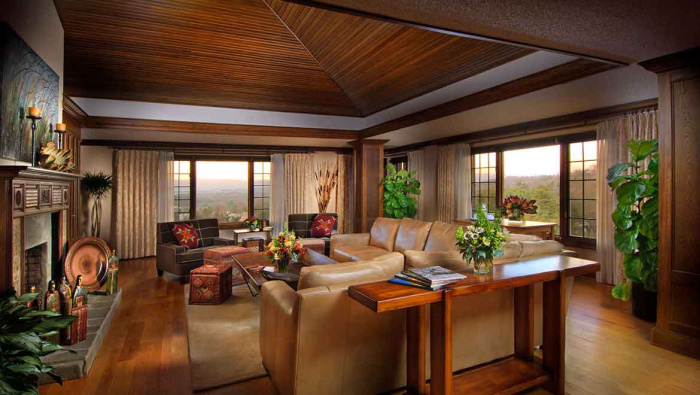 This hotel has its own ghost that even has a name!! "The ghost who roams the hallways of the main inn is referred to as the Pink Lady because of the flowing pink gown she wears."

This hotel was built in the early 1900s and is nestled in the beautiful Blue Ridge Mountains of North Carolina.

The rooms at the hotel are 5-Star luxury rooms that offer stunning views of the surrounding mountains.

I'm not gonna lie, it's beautiful. You have to prepare yourself though, because you might just see a ghost! 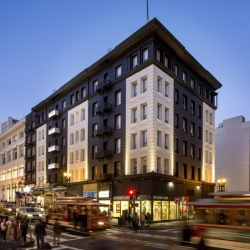 It is said that your best time to catch any paranormal activity is in the evenings at the Union Square Hotel. There are several ghosts that guests have reported seeing in and around the hotel.

There is the lady, thought to be playwright Lillian Hellman, who seems unwilling (or unable?) to leave room 207. She does everything from shift things around, to make spooky sounds, to just being constantly present.

There is another "ghost" that is supposedly a girl who commited suicide by plunging to her death over a century ago. She seems to be tormented with her life-altering decision, and can't rest in peace. She has been seen walking the halls of the hotel as well as in the parking lot. 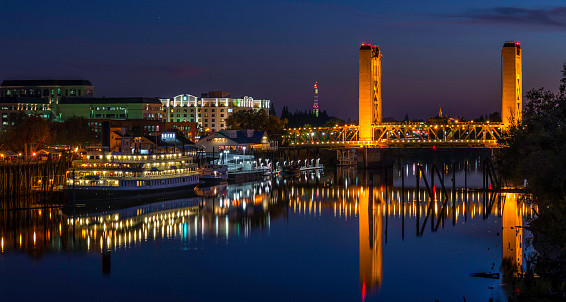 This was once a floating hospital during World War II, so it's seen its fair share of trauma throughout the years.

And, with trauma you nearly always find paranormal activity. This boat is no exception to this rule.

The Delta King is known as one of the most haunted locations in all of the city. It throws off a totally eerie vibe, and for good reason.

"The previous captain of the ship also seems unwilling to leave his post. He’s been spotted wandering the ship, gazing into the water from the deck, and relaxing on the balconies. Strolling across the wood planks, his footsteps from the past can still be heard aboard this floating piece of history."

The Colonial Inn in Concord, MA

This hotel, which was home to Henry David Thoreau for 2 years, has a history that goes all the way back to the Revolutionary War. Once again, with building that are that deep seeded in history, you often find ghosts and spirits.

"The most famous and sought-out spooky guestroom is 424. The room was once the operating room of Dr. James Minot, who had a practice in the inn during the Revolutionary War."

Guests -- those crazy ones who seek out the spirits -- claim to have heard and seen all kinds of crazy happenings in room 424. 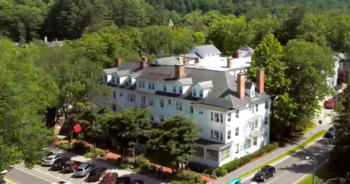 This hotel was built in 1773 -- and like we've said nearly every time before -- with those older buildings, you often find the most spooky happenings.

In this hotel, modern country meets New England charm with a unique lodging experience. It's a super adorable location, but I wouldn't go there if you are trying to avoid the supernatural.

They say the 4th floor is where most of the ghostly action happens. Many guests have reported seeing a man in a top hat or a young girl carrying flowers. Some guests say they awoken by the feeling that someone is in the room with them.

There are also unexplained "cold zones" that you may happen upon, electrical anomalies, and unexplainable knocking.

It is also said room 301 is a hotspot for creepy goings on, and it has been frequented by many ghost hunters and mediums throughout the years. 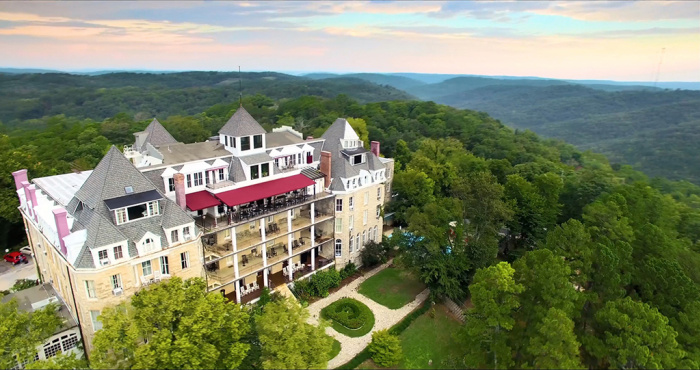 This hotel actually has a morgue in the basement, so you do the math on this one.

Guests to this hotel have reported DOZENS of spooky encounters, and you have a pretty good chance of experiencing your own if you decide to brave this hotel.

"Several famous guests have “checked out but never left,” including Michael, the Irish stonemason who helped build the hotel; Theodora, a patient of Baker’s Cancer Curing Hospital in the late 1930s; and “the lady in the Victorian nightgown,” who likes to stand at the foot of the bed in Room 3500 and stare at sleeping guests while they sleep."

This one would be a definite NOPE for me, but then I'm a total chicken.

This cute little bed and breakfast was built in the 1860s by Asa Jones. It does have some beautiful scenery, including a view of the water and overlooking Roanoke Island Marshes Lighthouse.

But, there are also spirits that haunt the place, including one ghost that everyone is pretty sure is Roscoe Jones, a former owner of the Inn.

Besides Roscoe, guests also report hearing strange footsteps, vases randomly crashing to the floor, radios turning on and off on their own, and blinds that open and shut.

BUT, all the creepiness just might be worth it to experience the beauty of the Outer Banks of North Carolina! 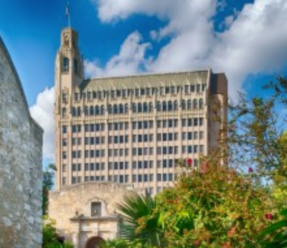 All I probably need to tell you is that this used to be a medical facility with a psychiatric unit located inside. Oh, and there was a morgue.

This hotel is known as the official hotel of the alamo, and is located right in the middle of all the action in San Antonio. It is beautiful, but it is also haunted.

"Reports of unexplained noises, apparitions, and the feeling of being touched have been reported by guests. The floors with the most paranormal activity that have been reported are the seventh, ninth, eleventh and twelfth floors."

What hotels have YOU stayed at that are haunted? Do you have any cool paranormal stories to share? Let us know in the comments.