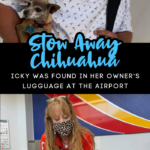 Jared and Kristi Owens were flying to Las Vegas for a fun-filled vacation, but they had a little hiccup in their plans when they got to the airport.

Were they smuggling drugs across state lines in their checked bag? Nope.

They were smuggling something, however, unknowingly.

See, when they got up to the counter to check their bags, they were told that their luggage was five pounds overweight.

As people often do at airport counters, they quickly opened their bags and tried to adjust the weight around.

What they did not expect to find was their pet Chihuahua, Icky, stowed away inside the luggage! She just didn’t want to see them go!! LOL!!

They put it on the scale and this bag is basically like five, five and a half pounds overweight. Really quickly we are like, oh, we have got to rearrange some stuff. Opens it up and literally, there’s our dog coming out of my boot, coming out of my boot with his head popping up.

Apparently they were in a packing frenzy, and didn’t realize that Icky had burrowed down inside the clothes they were throwing into the luggage.

She’s the burrower, that’s what she does. She burrows in clothes, she burrows in, obviously suitcases now.

Now they had a problem on their hands! Do they leave and miss their flight? That seemed like the only viable option in this situation.

But, Nope. Cathy Cook, an awesome Southwest Airlines worker who needs a huge raise, offered to take little Icky to her house. She volunteered to step up and watch the doggo while her owners went on their vacation.

How amazing was this employee?!? Things could have gone WAY differently, but Cathy basically saved the day!

They have got a heck of an employee in Cathy. She went above and beyond and never made us feel, you know, they could have turned us in saying we were trying to smuggle a dog to Vegas or something. Never acted like that, they were extremely gracious. Like I said, she was willing to watch our dog for us while we were gone.

Jared says he is fully aware how lucky they were to find Icky before she got put in the luggage compartment of the plane.

Thank goodness we found this dog because you would have gotten to Vegas and you probably would have had a deceased animal in your bag.

Icky and her parents are now home, but James and Kristi said they are going to carefully check their luggage before they go on vacation from now on. LOL!!