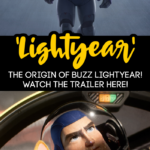 Disney and Pixar just released the trailer for the new ‘Lightyear’ movie that will release later this year and I am so excited!

This is the origin story of Buzz Lightyear, who is the hero that inspired the toy in the ‘Toy Story movies.

The movie follows the Space Ranger on an intergalactic adventure that families are sure to love!

Buzz’s world was always something I was excited about. In ‘Toy Story,’ there seemed to be this incredible backstory to him being a Space Ranger that’s only touched upon, and I always wanted to explore that world further. So my ‘Lighytear’ pitch was, ‘What was the movie that Andy saw that made him want a Buzz Lightyear toy?’ I wanted to see that movie. And now I’m lucky enough to get to make it.

Chris Evans is the voice of Buzz, and other voices are done by Keke Palmer, Dale Soules, and Taika Waititi as a group of recruits.

The cast for ‘Lightyear’ is truly a dream team. Each of the performers immediately inhabited their character, which gave us the opportunity to play a bit during recording sessions. This resulted in a level of specificity that elevated the material and brought additional depth to the characters’ relationships. It has been a privilege to work with such a talented and generous cast.

‘Lightyear’ will release on June 17th, 2022, and my family is super excited about it, you’re never too old for these films.

Watch the trailer below and let me know what you think in the comments!