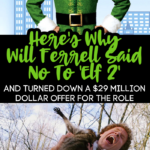 We all know that ‘Elf’ is one of the most popular Christmas movies EVER, but did you know it was going to have a sequel?

Yep, there was supposed to be an ‘Elf 2’ and Will Ferrell turned down the sequel… I mean, you obviously can’t have a sequel without Will…

He would have received $29 million to take on his role as Buddy the Elf for the second time and he said NOPE!

I would have had to promote the movie from an honest place, which would’ve been, like, ‘Oh no, it’s not good. I just couldn’t turn down that much money. And I thought, ‘Can I actually say those words? I don’t think I can, so I guess I can’t do the movie.’

It was going to be called ‘Elf 2: Buddy Saves Christmas’ and in a recent interview, Will said it was “it’s not good”.

I just think it would look slightly pathetic if I tried to squeeze back in the elf tights. Buddy the middle-aged elf.

Will Ferrell told Andy Cohen on Watch What Happens Live

James Caan, who played Walter which is the real father of Buddy, said that wanted to return for a sequel but that Will and Jon Favereau “didn’t get along very well”.

We were gonna do it, and I thought ‘Oh my God, I finally have a franchise movie. I can make some money, let my kids do what the hell they want to do.’ The director and Will didn’t get along very well. Will wanted to do it, and he didn’t want the director. He had it in his contract. It was one of those things.

Jon Favreau said that Warner Bros and New Line Cinema pitched ‘Elf 2’ to him several times but he thought a sequel would be “a big gamble”.

a big gamble. If I don’t do anything I’d be very happy with what [Elf] is. The minute you take it on, you try to add on to something, you always run the risk of diminishing from the original.

While I know many people would love a sequel, I think it’s best to leave it as it is because sequels sometimes ruin the magic of the original movie.