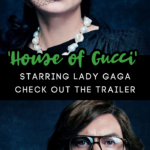 Lady Gaga is about to return to the Big Screen in House of Gucci, and they just dropped the second trailer for the film.

The story is so riveting, and it’s actually based on a book, The House of Gucci: A Sensational Story of Murder, Madness, Glamour, and Greed.

Now, you have undoubtedly heard the word Gucci from the world of Italian high fashion, and you are correct.

This story is about the same family — but the story has nothing to do with fashion.

You see, this family has a notorious history that includes love, betrayal, extravagance, revenge, and it all culminates with the murder of Maurizio Gucci — the grandson of Gucci pioneer and founder Guccio Gucci.

In 1998, Patrizia Reggiani, the ex-wife of Maurizio Gucci, was tried and convicted of ordering the death of Maurizio. She was finally released in 2016, but the story is so intriguing!!

You will be totally glued to the screen.

This film is chalk full of A-list actors, so you know it’s going to be hot!! I’m seeing Oscar contender in the future!

Jeremy Irons (who has been a TON of stuff, but he is the voice of Scar in The Lion King) plays Rodolfo Gucci.

Jack Huston (who you might know from Boardwalk Empire or American Hustle) plays Domenico De Sole.

Salma Hayek (who has been in so many things, but my favorite is Fools Rush In) plays Giuseppina “Pina” Auriemma.

Al Pacino (I don’t even have to tell you who he is) plays Aldo Gucci.

House of Gucci is set to open on November 24th in theaters, just in time to hit it up for that traditional Thanksgiving movie.

You can see the first trailer for the movie HERE.

The second trailer for the film has just dropped, and you can see it HERE.