WARNING: This post contains spoilers for both Star Wars: The Force Awakens and HBO’s Girls.

When my boyfriend came home after seeing Star Wars: The Force Awakens for the first time, he asked me if I “knew that goofy looking guy from the show Girls (HBO) was in the movie?”

“Yeah. He plays a pretty huge role too. He was awesome.”

Needless to say, when we went together to see it a few days later, I knew immediately exactly who was behind Kylo Ren’s mask. That voice is unmistakable. And it was weird. Here are a few reasons Why watching Adam Driver play Kylo Ren was weird. 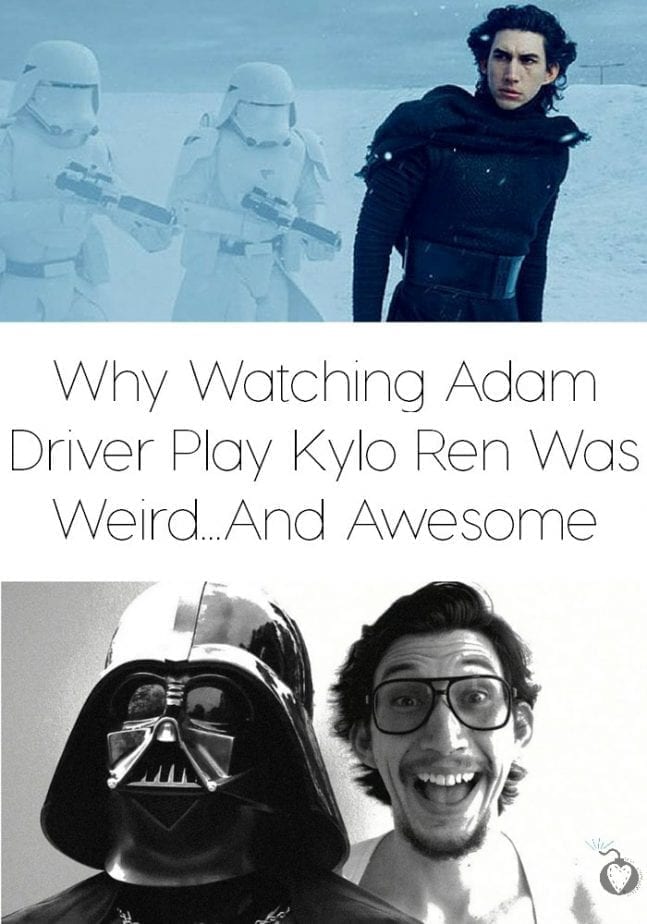 Yes. You heard me right. On HBO’s Girls, Driver plays the love interest of the show’s main character, Hannah, so naturally we’re going to see them get it on. That’s not what makes it weird. Every scene with the two of them together in the first season is a painfully cringe-worthy sex scene. So awkward it’s borderline unbearable to watch. Hannah and Adam’s (Yes, that’s his name in the show, too) relationship eventually grows into something really sweet, but in the beginning we just see them both in various…ahem…positions. Kind of hard to watch Kylo Ren interrogate Rey in Star Wars when you’ve seen him break up with his booty call and then start playing with his lightsaber before she’s even had a chance to leave the apartment on Girls…with the door wide open.

Yes, I’ll be the one to say what everyone else was thinking. Adam on Girls is charming, and as you get to know him, you definitely fall in love with the guy. What I want to know is; why did he look so goofy on Girls but so handsome in Star Wars?! He’s not an ugly guy at all, but the physical differences between the two characters is shocking. Was it because he carried himself differently on girls? Did they do his makeup differently? Did they give him a goofy haircut? Is it because he shaved for Star Wars? Is it because I dig villains?! I NEED TO KNOW!

3. I’m still bitter that he broke up with Hannah.

Yes, I know she sort of screwed him over when she traipsed off to another city, but damn did he handle it all wrong. I was invested in them! I loved that their relationship wasn’t perfect. Not imperfect like in a romantic comedy that makes me want to vomit, like FOR REAL imperfect. Believably imperfect. Seeing their relationship end was horrible. When he finally took of his mask in The Force Awakens, I was met with an unexpected rush of heartbreak. Why, Adam? Why?! And can we talk about that horrible girl he was with? Quit projecting your effortless self-confidence onto other women and go date someone who isn’t Hannah’s boyfriend, Mimi Rose Howard! #stillbitter

I totally agree with you. I used to watch Girls all the time and when I saw "Adam" as Kylo Ren it freaked me out a little. I thought to myself, hmmm, is he going to masterbate under that costume because he has a bit of a freaky streak in that show? hahahahaha Needless to say, he was amazing. He is truly a versatile actor and I'm so happy for him how his career has really taken off.

Cleansing Solutions Vancouver is an expert cleaning company company from Vancouver, BC.

It provides premier high quality and also 100 % fulfillment with its unequaled knowledge in carpet cleansing in Burnaby, furniture as well as heater cleaning, as well as a lot more, across whole BC region.

Look for Companies on Internet search engine: Numerous business begin by searching for fulfillment services on Google, Yahoo, or Bing.

So we constructed ITSI to be a service-aware" tracking option that maps the applications, servers and also devices in your data center to the high degree business solutions that indicate one of the most to your business.