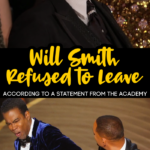 Apparently, Will Smith was actually asked to leave the Oscars by the academy after he slapped Chris Rock.

The academy said that when Will Smith was asked to leave he actually refused to leave, whoa…

Things unfolded in a way we could not have anticipated. While we would like to clarify that Mr. Smith was asked to leave the ceremony and refused, we also recognize we could have handled the situation differently.

for violations of the academy’s standards of conduct, including inappropriate physical contact, abusive or threatening behavior, and compromising the integrity of the academy.

I’m not sure how things like this work, but from what I’ve read it will take a few weeks to conclude this process and Will Smith will be given a 15-day notice about a vote about violations and any sanctions they will take.

Will Smith will have an opportunity to explain himself in writing and the board of governors is scheduled to meet on April 18th, so I guess we all have to wait and see what will happen.

Mr. Smith’s actions at the 94th Oscars were a deeply shocking, traumatic event to witness in-person and on television. “Mr. Rock, we apologize to you for what you experienced on our stage and thank you for your resilience in that moment. We also apologize to our nominees, guests and viewers for what transpired during what should have been a celebratory event.

Wanda Sykes was also a host that night and recently said in an interview with Ellen Degeneres that Will Smith should have been escorted from the event instead of being allowed to stay and accept his Oscar.

I’m still a little traumatized by it. For them to let him stay in that room and enjoy the rest of the show and accept his award — I was like, how gross is this? This is just the wrong message.