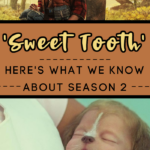 Is Sweet Tooth going to get a season 2 on Netflix?

Now, Netflix is currently remaining tight-lipped on the chances that we will again get to be a part of this AWESOME show.

But, I have some theories — and perhaps a few clues that point to the next season.

Have y’all been watching Sweet Tooth on Netflix??

If you haven’t yet seen it, what are you doing with your life — go watch it right now!!

I haven’t been so into a show in quite sometime — and I watch A LOT of shows for this job!!

Now, I know, it looks a little bizarre when you see it advertised on the Netflix main page — I mean, there is a boy that appears to be part dear — but it has been #1 on the Netflix site just about the entire time since it’s release on June 4th. (clue #1)

ICYMI, Sweet Tooth is a fantasy show that has been adapted from a DC comic — that’s important to keep in mind while watching — although they changed a lot of it from the original comic.

Season 1 left us with a pretty big cliffhanger (clue #2) — spoiler alerts ahead!

Gus and a few hybrids are trapped in a compound of sorts, where people are going to be experimenting on them to try and find a cure to fix the sick ones.

Like in the original comic, Jepperd is forming a team (or a duo in this case) to try and save the kids — they can’t just leave us hanging, right?!?

The series is also blowing the numbers UP over at Rotten Tomatoes, with a critic score of 98 and an audience score of 92 — those are some pretty big numbers for Sweet Tooth to pull on the film site. (clue #3)

Now, if Netflix — who picked up the show from Hulu — were to cancel the show, it wouldn’t be the first time that they have pulled the rug out from under the audience.

Remember Jupiter’s Legacy? It got the axe while it was still in its infancy on the streaming platform — cancelled after only a month.

As far as Sweet Tooth is concerned, it has a ways to go — over 40 issues — if they follow the storyline of the comic AT ALL — which there are PLENTY of similarities in plot and storyline.

If you need more reasons to go watch Sweet Tooth right now, it was produced by Robert Downey Jr, and it was filmed in BEAUTIFUL New Zealand.

If you are a fan of The Umbrella Academy and Stranger Things, you are going to LOVE Sweet Tooth!!

Let’s just hope and pray that they extend the series beyond season 1 — the more people that watch, the better the show’s chance of survival, right?!?