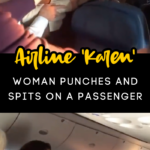 ‘Karens’ are everywhere these days, right?!?

It seems like we can’t go a day without hearing about how some crazed person went off on a retailer or restaurant worker, on innocent bystanders, on neighbors — and now on airplanes.

This ‘Karen’ was filmed onboard a flight from Tampa to Atlanta yelling at, punching, and spitting on a passenger before being escorted off the plane.

The clip, which was uploaded to Twitter, shows what seems to be a dispute over a gentleman wearing a mask.

This female passenger, although she has her mask down around her chin, is yelling at a man to “mask up.”

The two exchanged heated words — and a bit of cursing at each other — before the woman hauled off and punched the man for calling her a b****.

The woman is obviously offended, but instead of enlisting the help of airline officials, she gets close to the man and punches him.

He yells back, “You’re going to jail. That’s assault.”

She obviously doesn’t care. After he calls her a ‘Karen,’ she proceeds to spit on him.

Then some airline employees grab her and try to move her down the aisle.

Another lady is heard saying, “She went crazy on the airplane — she poured hot water on my leg.”

The woman is escorted off the plane, where cars with red lights are seen taking her away.

Based on the statements gathered and visible evidence, officers detained Ms. Cornwall and contacted the on-call FBI agent — The officers then relocated with Ms. Cornwall to the domestic Atlanta Police precinct where FBI agents responded and took custody of Ms. Cornwall.

You can see the entire exchange between the airline passengers HERE.