That’s one of those quotes that you instantly know. I mean, right?

I assume you know what movie that comes from, or seriously, we can’t be friends.

Actually, pretty much the second I hear it, I have to do a youtube search and watch the part again. But, because I am such a good friend, (to those of you that did get the quote–just sayin’) I’ll save you the trouble…

Why have I been thinking about this movie lately? Well, the other day when I was surfing the internet for lulz researching for my upcoming novel, I came across this article*: 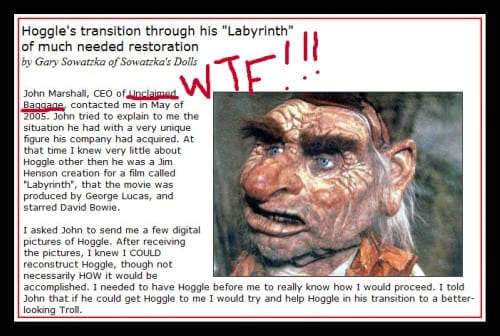 Yeah, they freakin’ lost Hoggle in unclaimed baggage. At first I was all outraged. How dare they not call unclaimed baggage to get him back? Animatronic puppets cost a lot to make, and they just left him there! Then I started thinking about it. Dude, why the hell would they need an old dwarf robot that’s already been used for a major motion picture. They probably got off the plane and were all, “Man I really want to take a nap, but I hate walking down to that luggage thing. You know what? Screw it, let the airlines figure out what to do with him. It’s not like we can use him again, right?”

Damn, that was a good movie though. Remember Ludo? 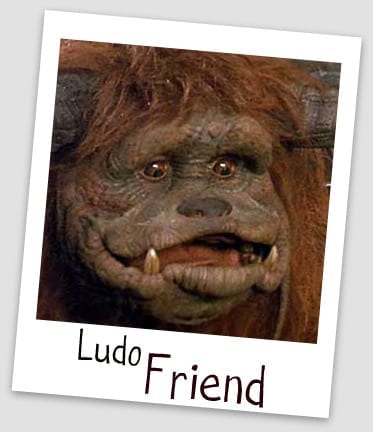 Aw, the thing about Ludo was, she should have been scared of him–but JC was such a total badass that she wasn’t. I think that’s maybe what made the Goblin King love her so.

Because, I’ll tell you right now… I was totally and completely in love with him. 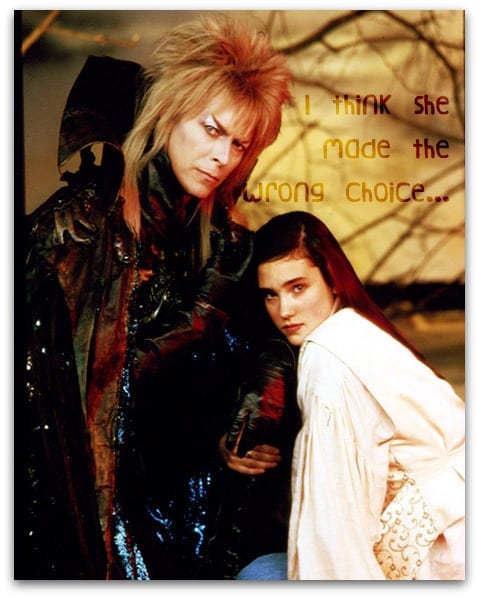 *You can find that full article here, but be warned that they show you Hoggle without his face on, and it might ruin a childhood friend.

Man, I love that movie. My VHS copy was pretty worn out. David Bowie in tights and L'oreal shadow...who knew? .-= jmartinlibrarian´s last blog ..EYE OF THE AGENT =-.

You know I actually saw a news special about the huge unclaimed luggage store several years ago. Apparently if you don't claim your luggage within a certain amount of time the airlines sell it to this giant warehouse of a store and they turn around and sell your missing stuff to the public. I think I recall the Hoggle puppet being several thousand dollars to buy back. Guess they didn't think he was worth it. Poor Hoggle...

That movie used to scare me so much when I was a kid!

Ahh! Love it! I was so obsessed with the movie (still am) that some friends and I in high school started plans to make it into a play. Alas, it didn't work out. You know, puppets, animatronics and all that--out of our league.

Poor Hogwart...'my name is Hoggle!' getting lost in baggage like that. =(