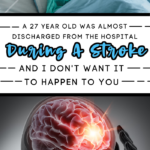 This is a scary story which is all too familiar to me, and I don’t want it to happen to you too.

A 27 year old went to the hospital a day after her birthday party, and she was almost sent home, because the hospital thought she was just hungover.

Spoiler Alert — she WASN’T just hungover, and she was ACTIVELY having her second stroke when the doctors at the hospital began her discharge.

THANK GOODNESS for her mother who advocated on her behalf, and insisted they do a brain scan before they discharged her.

Nearly the SAME EXACT thing happened to me, which is why I STRONGLY suggest you know the symptoms of a stroke, and have an ADVOCATE that will help you through the process.

In 2016, I was rushed to the hospital near my house, because I had woken up during the night, and my face and the left side of my body was completely numb.

I had been having searing headaches for a month, but this time my body was affected.

This particular night, I had woken up also uncontrollably throwing up, and I couldn’t stand or walk.

When the ambulance got to my house, they immediately thought I was on drugs.

“What have you taken, and how much?” they asked as they checked my blood pressure and blood sugar levels.

I was having trouble speaking, so my husband told them I hadn’t had anything to eat or drink.

No. They wanted to know what drugs I had in my system.

I was completely confused, and I shook my head feverishly, and told them I hadn’t taken anything.

After the EMS WALKED ME to the ambulance, making fun of me because I was having trouble standing and walking, they took me to the hospital.

As I was waiting in a room at the emergency center of the hospital, I could hear the EMS talking to the nurse outside the door.

“Drug seeking,” “faking it,” and “here we go again,” were the things I was able to make out of their conversation.

My husband and myself were LIVID, but they gave me some nausea medicine and sent me home.

I went to that hospital FOUR MORE TIMES, and each time, they told me nothing was wrong with me.

My symptoms progressively got worse, so we headed an hour and forty five minutes out of town, to the closest university hospital.

Within 30 minutes, they knew something was wrong, and I was in for an MRI.

Surprise! The MRI showed three “little” strokes, and one major stroke in my brainstem.

I was in the hospital for TWO WEEKS, where they took what was going on seriously, and told me I was lucky to have had the foresight to get to a different hospital.

SIX years later, I am still experiencing the aftermath of my strokes.

So, when I hear stories about how that 27-year-old woman was treated, and almost sent home from the hospital, I get enraged.

It just reminds me that EVERYONE needs to be aware of their symptoms.

EVERYONE needs to have an advocate who can speak on their behalf.

If you experience ANY symptoms that you even SUSPECT might be a stroke, act fast — literally, think of the letters that are in the word F.A.S.T.

Don’t let the hospital get away with “writing you off,” and demand they do a brain scan.

In my case, a CAT scan wasn’t good enough, and they needed an MRI to assess the strokes that I had already had.

Have someone there with you, who will speak up when the doctors don’t want to take the time to do the scans.

Your symptoms may be nothing, but they may also be something MAJOR that they need to catch.

I was 36 when I had the strokes — and they have no idea what caused them.

The lady that they just almost sent home in Texas was 27!!

Strokes can happen at ANY age, and to ANYBODY!!

Please. Know the symptoms, and have your advocate.

It could, literally, mean the difference between life and death.