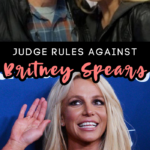 What is even going on right now? How is this even possible?

Judge Brenda Penny has ruled AGAINST Britney Spears in her conservatorship case.

The conservator’s request to suspend James P. Spears immediately upon the appointment of Bessemer Trust Company of California as sole conservator of estate is denied without prejudice.

Last week, Britney Spears finally spoke up for herself, and left some pretty harsh accusations out on the table. Just about EVERYONE thought it was a done deal, and Britney would finally be released from her 13 year conservatorship.

Britney, who had a court-appointed lawyer, wanted to have her father replaced as co-conservator, and to appoint Bessemer Trust as sole conservator.

BUT, apparently the judge didn’t think that was in her best interest.

Jamie, Britney’s father, has been in control of her massive $60 million fortune since she had that mental break in 2007.

Britney claims that the conservatorship under her father was “abusive” and left her “traumatized.”

She even claimed that she has to get PERMISSION to remove her IUD so she could have more children.

Now, I’m not a lawyer, nor am I a judge, but what happened to “my body, my choice?” This just seems straight-up crazy to me.

In response to the allegations that Britney made of abuse, being forced to take drugs that made her loopy, and involuntarily being taken to a psych facility, Jamie did make one statement-ish.

He is sorry to see his daughter suffering and in so much pain. Mr. Spears loves his daughter, and misses her very much.

So, I guess it’s back to the drawing board for the #FreeBritney movement, of which I am now a proud supporter.

The girl just needs her life back — for the love, she is nearly 40. Just let her live her life!!