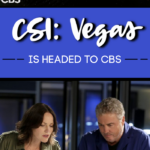 If you have seriously been missing the original CSI, you are IN LUCK!!

The show is headed back to television — well, sort of.

William Petersen and Jorja Fox will again grace the CSI world as Gil Grissom and Sara Sidle, but it will be just a bit different this time.

This is going to be a NEW show that is actually a sequel to CSI: Crime Scene Investigation, called CSI: Vegas.

CSI: Vegas opens a brand-new chapter in Las Vegas, the city where it all began. Facing an existential threat that could bring down the Crime Lab, a brilliant new team of forensic investigators must welcome back old friends and deploy new techniques to preserve and serve justice in Sin City.

If you can believe it, it’s been TWENTY years since the OG CSI: Crime Scene Investigation hit the airwaves.

Last year, CBS teased us all by letting us know they wanted to come out with a new show to commemorate the twentieth anniversary of CSI — which ran for FIFTEEN seasons.

That was pretty much all we heard about it.

BUT now, we have confirmation that this new CSI: Vegas is going to drop on CBS later this year.

We are thrilled to welcome the next generation of forensic criminalists to the CSI brand and unite them with the legendary characters from the past who we still love, including the extraordinary Billy Petersen and Jorja Fox.

I can’t wait to see how they play everything, because a lot has happened in the world of forensic investigation in the last 20 years!

It’s going to be so cool to see how they spin that new technology into this new show.

We are also going to get to see some new crime scene investigators on the scene: Paula Newsome, Matt Lauria, Mel Rodriguez, and Mandeep Dhillon.

Be watching Totally The Bomb for more news on this epic new show as we learn about it.