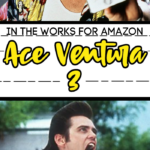 It appears that the writers of ‘Sonic the Hedgehog’ are developing ‘Ace Ventura 3’ for Amazon.

I have to admit, I really liked the first ‘Ace Ventura’, and honestly… I don’t remember much about the second one. Was it good? I dunno.

The first ‘Ace Ventura’ movie was released back in 1994, before I even became a mom! Geesh, I feel so old!

I believe this was Jim Carrey’s first major movie, and it was after he had got a pretty good following from his role on ‘In Living Color’. If you’ve never watched ‘In Living Color’ you really should!

His role in ‘Ace Ventura’ really did launch his career though! The year after it came out, they released ‘Ace Ventura: When Nature Calls’ which was the sequel.

Titles such as Ace Ventura, Major League, Young Guns, Dead Ringers, Diabolique, and Nightbreed are a few examples of multi-platform projects on the fast-track for reinvention. COVID, audiences have been in love and are thrilled to have beloved characters brought back with new stories. Ace Ventura will see a new day at Amazon as a major motion-picture/theatrical with the Sonic the Hedgehog writers.

Here’s the deal though, they have made no mention of Jim Carrey returning to his role as Ace Ventura. So, would you watch it if he isn’t in it?

I mean, who can pull off that role the way that he did? Ace Ventura is Jim Carrey through and through. I guess we’ll just have to wait and see!