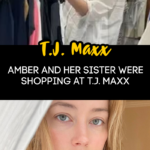 I guess her lawyers weren’t lying when they said that Amber Heard doesn’t have the money to pay what she now owes Johnny Depp.

Amber Heard was recently spotted at — get this — a T.J. Maxx shopping with her sister, Whitney Henriquez.

Now, there’s nothing wrong with T.J. Maxx. I definitely shop there. But then, I’m not rich and famous with tons of disposable income to drop at overpriced stores.

Amber and Whitney were spotted out during a girls’ shopping day at the T.J. Maxx in Bridgehampton, NY.

Look at that. They’re just like us!! I would totally go on a girls’ shopping day to the local T.J. Maxx.

According to TMZ, Amber and Whitney were checking out all the racks of clothes. They seemed to specifically like one pair of white linen pants.

They supposedly had their baskets full to the brim with clothes — I’m assuming — to purchase.

When Amber noticed the cameras though, she headed for the hills.

Hmmm. That’s not like Amber, at all. She seems to LOVE the camera — as we could tell by her dramatic performance during the Johnny Depp defamation trial.

Now, I’m not sure if they actually bought anything. If they’re anything like me, I can’t leave that store without dropping at least 50 bucks!

It is rather strange that she would be at a T.J. Maxx. But, it does go right along with the claim that she is “broke.”

There’s no shame in the game, Amber. Filling up your bag with some retail therapy at T.J. Maxx might be exactly what the doctor ordered.