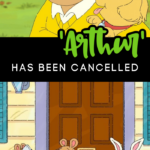 I have some devastating news from the world of PBS, that will ruin your entire day.

Anyone who grew up in the 90s or later inevitably spent some quality time turning the channel to PBS and watching Arthur.

I mean, Arthur, D.W., Buster, Francine, Muffy, Binky, and the rest of the gang were pivotal characters in our formative years.

Well, Kathy Waugh, the genius writer of Arthur, spilled the tea during a recent episode of Finding DW (a podcast by Jason Szwimer, one of the original voices of DW).

Arthur is no longer in production, and actually wrapped about 2 years ago — the shows airing now are the final episodes of the series.

Arthur is no longer in production. We had our wrap party two years ago. I think they [PBS] made a mistake, and I think Arthur should come back and I’m not alone with that.

Arthur has been a part of our lives for 25 seasons — the show premiered in 1996.

Not only did we grow up on Arthur, but our kids likely continued the tradition, running to sit in front of the TV as soon as the theme song started.

Now, it was suggested, by several of the voice characters of the show, that Arthur might be finished, but we hadn’t heard anything official — until now.

Can we start a petition or something? It’s truly the end of an era!