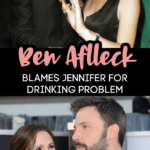 After talking with Howard Stern, the world has learned that Ben Affleck pins his drinking problem to his ex-wife, Jennifer Garner…

And although real life issues can make alcohol sound appealing, I don’t think any situation like this should have the blame placed on another person.

“Part of why I started drinking was because I was trapped. I was like, ‘I can’t leave because of my kids, but I’m not happy, what do I do?’ And what I did was [I] drank a bottle of scotch and fell asleep on the couch, which turned out not to be the solution.”

To me, this feels like a slap in the face. Garner stood by him, took him to rehab, and helped him every step of the way. and now he’s blaming her…it just doesn’t sit right!

I hope both of them are able to heal and move on from this. But for now, Affleck is getting a LOT of backfire on some of the statements he made negatively towards Garner.

He ain't nothing but a but an alcoholic..no one in their right mind would believe him..that's what alcoholic's do..blame someone else..