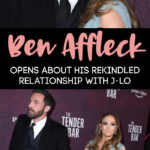 I’m starting to think Ben Affleck just wanted to be on the news again or something…I feel like he’s everywhere right now!

I have to say, I originally thought it was cute that Ben and J-Lo got back together. But with him blaming Jennifer Garner for his drinking, I’m not feeling so great about it now.

But while speaking to Howard Stern, Ben revealed that his decision to pick up where he left off with J-Lo after 17 years wasn’t taken lightly.

Affleck stated that his main concerns would be the media impact on the relationship, as well as on his children.

“It crossed my mind for sure. My responsibility to my children is the highest responsibility. I don’t want to do anything that is painful or destructive to them if I can help it.”

And yet, he says that right after bashing the mother of his children. What on earth was he thinking?